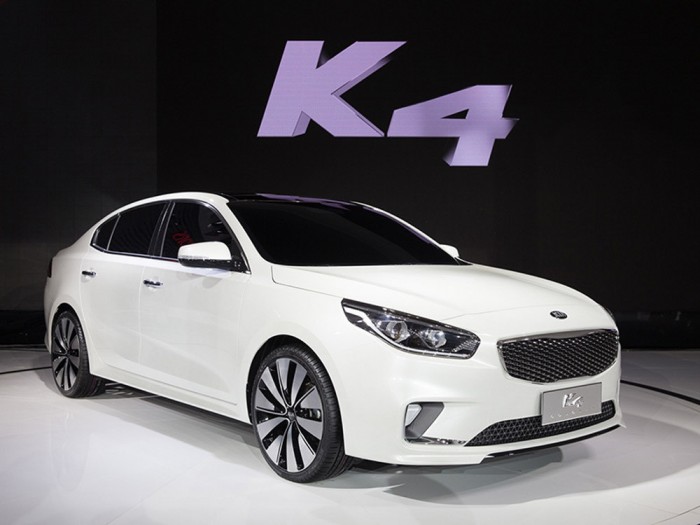 The Kia K4 Concept made its world debut at Auto China 2014.

Kia has been on something of a hot streak when it comes to world premieres of concepts and production models. From the exhilarating look of the Kia G4 Stinger sport car concept to the sharp new look of the don’t-call-it-a-minivan 2015 Sedona, the automaker has not experienced any misfires with the auto show-going public. The new Kia K4 Concept, which was unveiled at the 2014 Beijing International Automotive Exhibition last week, is yet another bullseye in Kia’s quest to put a new face on their growing brand.

While not nearly as loud as the Stinger or as bold as the Niro, the K4 Concept is potentially more significant in that it previews Kia’s consideration for Chinese consumers. This simple and elegant midsize sedan fits somewhere between the Kia Forte and Optima, which are sold in China as the K3 and K5, respectively.

While there are few other details available about the K4, they didn’t mince words about a production version of the concept:

“From its earliest development stage, the K4 concept was designed specifically to satisfy Chinese consumers’ needs and preferences,” said Soon-Nam Lee, Vice President of Kia Motors Corporation’s Overseas Marketing Group. “Now, we are confident that the production version of the mid-size K4 family sedan will set a whole new standard for its class in China when it is launched later this year.”

Of course, the Kia K4 Concept is not something intended for American drivers (at least not yet, anyway), so we can all now happily return to pleading with Kia to make a production-version G4 Stinger happen.