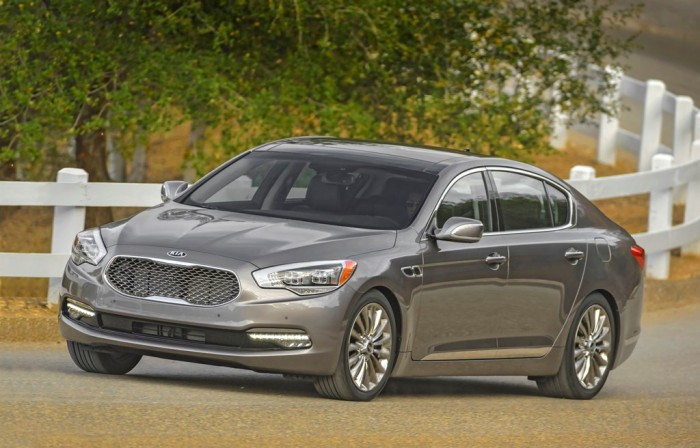 The Kia K900, winner of the Decisive Magazine 2015 Urban Car of the Year Award

Kia doesn’t have any presentations scheduled for this week’s North American International Auto Show (NAIAS) in Detroit, but that doesn’t mean the event is a total bust for the Korean automaker. In fact, before all the big premieres got underway, the brand’s 2015 Kia K900 sedan was named the Decisive Magazine 2015 Urban Car of the Year at the 19th Annual Urban Wheel Awards (UWA) ceremony, the “Official Multicultural Event” of NAIAS.  The ceremony was presided over by emcee Judge Mablean Ephriam, who is best known for her seven years of service to the judicial reality series Divorce Court, and for playing the judge in Tyler Perry’s Madea films.

With an eye towards practicality and style, the UWA panel judged dozens of new 2015 cars in a variety of urban settings, and came up with the following winners: Urban Car of the Year (Kia K900), Urban Truck of the Year (Ford F-150), and Urban Green Vehicle of the Year (BMW i8). The K900 beat out the Mercedes C Class and the Hyundai Genesis, which were both runners-up for the award.

“Since arriving in the U.S. market 20 years ago, the Kia brand has always challenged convention and redefined the notion of what value is,” said Michael Sprague, Kia Motors America’s executive vice president of sales and marketing.  “To be recognized by Decisive Magazine and the Urban Wheel Awards jurors for the Urban Car of the Year Award is an indication that our first foray into the premium luxury segment has the right combination of design, craftsmanship, technology – and value – to be a winner.”

UWA juror Les Jackson praised the K900 for its “understated elegance that speaks of the owner being a savvy, trendy professional.”