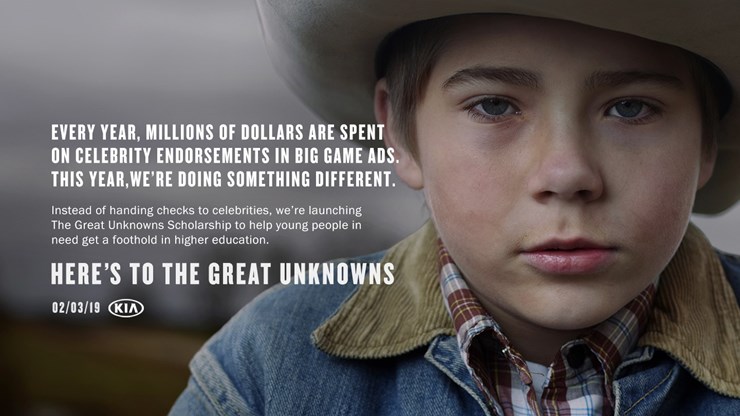 Kia is trying to shake things up for the Super Bowl this year by giving us a different kind of half-time commercial. Instead of running a promo for its brand, Kia will launch what it calls The Great Unknowns Scholarship, which donates money to need-based scholarships that might otherwise be overlooked.

Kia ran a small 40-second teaser for The Great Unknowns program that opens with a wall of old, blocky TVs inside a display case. For some reason, the display case of TVs is inside (or next to) the Donald R. Cleveland Attorney At Law office, according to a storefront window in the shot.

Better than Ever: This luxury-like 2019 car of the year contender comes without the luxury price tag

All of the TVs are tuned in to the same thing, which shows the back of some glamorous TV star with perfect blond hair walking down a red carpet with cameras lighting up the screen. A boy with a slight twang accent narrates in the meantime, saying that millions will be spent on celebrities to show up in commercials during the big football game.

He’s not wrong, though we think that “millions” may be a little on the low side.

The screens start to switch over and show young individuals staring somberly at the screen — except for a lone teen wearing a big smile on his face. We think he’s an exception.

The last screen changes the channel to show a boy with a cowboy hat, presumably the narrator, asking us what good could be done if the money that goes to big celebrities with holes in their pockets goes towards the education and aid “unfamous” people need?

Learn From the Past: Read about one of the biggest automaker’s history and how they came to be

For a small 40-second clip that foreshadows The Great Unknowns Scholarship program, Kia knows how to tug at our heartstrings. While it’s not overly sad like animal rescue commercials, it does strike a serious and thoughtful tone of the kids’ futures and wellbeing.

The Great Unknowns campaign officially launches on Sunday during the Super Bowl, and we’ll probably see another ad from Kia around then.

Here’s the link to the scholarship campaign’s official website: TheGreatUnknowns.org