Kia has confirmed that they intend to introduce a new rear-wheel-drive flagship sedan in the United States early next year. However, the Kia K900 is not an altogether new vehicle at all; it’s the same K9 that Koreans have been enjoying for years with a proven track record of luxury and power. 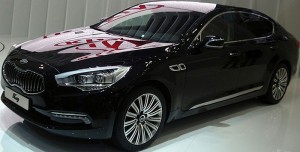 The Kia K900 is a vehicle that provides “a 7-series value for a 5-series price,” according to Kia national dealer council chairman, Dan Hobden. With an expected price tag somewhere in the $50,000-$70,000 range, the K900 will come with either a V6 or V8 engine with the latter able to produce up to 420 horsepower.

Unlike Kia’s flagship Cadenza, the K900 will use a rear-wheel-drive layout, resulting in even weight distribution, better handling and braking, and more power. Hobden said that Kia intends to launch the K900 in early 2014, though he did not mention a specific date.

Automotive News is also reporting that Kia only intends to sell about 5,000 K900s a year, so the rollout will likely be limited to key markets including those along the West Coast and in New England. Now, if only we could get Kia to move away from names that sound like dogs and vehicles that look like adorable rodents.