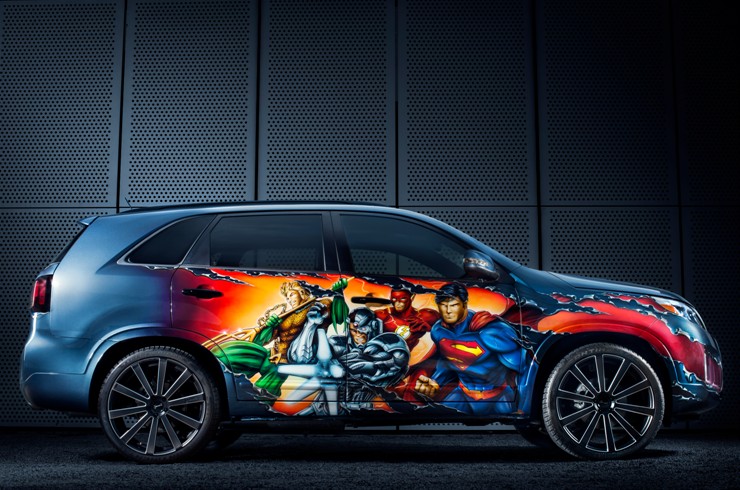 We don’t know what caused the sudden boom in cartoon-inspired SUVs, like Toyota’s SpongeBob SquarePants-themed Highlander, but we say, “keep um’ coming”.  The most recent installment of one such vehicle did not come from Bikini Bottom, but rather from Gotham, Krypton and other parts of outer space.

There was no better place for Kia to unveil its Justice League-inspired Sorento than at the San Diego Comic-Con, and the reveal made quite a splash, as on-lookers not only got to see the super hero-adorned Sorento, but they also had the privilege of watching legendary comic book artist and DC Entertainment (DCE) Co-Publisher Jim Lee complete his masterpiece.

The Justice League Sorento was created to raise awareness and funds for Kia’s “We Can Be Heroes” initiative, which was started to fight the hunger crisis in the Horn of Africa.

“Our goal in 2013 was to bring our fans and the JUSTICE LEAGUE Super Heroes together in unique ways to fight the hunger crisis in the Horn of Africa. That effort started with the once-in-a-lifetime opportunities we’ve been able to offer through our crowd funding campaigns that have raised over $285,000 to-date,” said DCE President Diane Nelson in a press release.

You can expect that total to rise significantly as the Justice League Sorento hits eBay for a charity auction, so swing over to the auction site and place your bid.  Who knows; for the right price you could drive to work in a comic book on wheels.