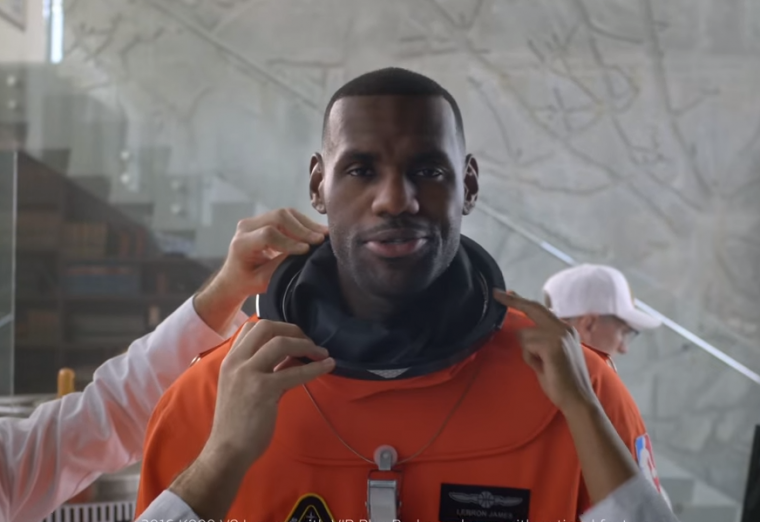 Will LeBron James be dunking on the moon soon?

Basketball superstar LeBron James is full of surprises. After winning two NBA championships with the Miami Heat, nobody thought he would return to play for the Cleveland Cavaliers, but that’s exactly what King James did in 2014. Now, Mr. James is out to prove his doubters wrong again, as he stars in another new Kia commercial aimed at proving that he does in fact drive the Kia K900 premium luxury sedan.

The commercial begins with a scene with LeBron casually sitting on an office desk, while he reads a message from Twitter user @Norvina1, which says, “LeBron drives a Kia like I fly a spaceship.”

James uses the logic that since he really drives the K900 that Norvia must really fly her very own spaceship. As a member of the US Olympic men’s basketball team, LeBron has traveled all over the world, but space is probably one place he has yet to take his talents. Excited by the possibility of dunking on the moon, LeBron James suits up in his custom spacesuit and then jumps into his K900 sedan, while the narrator alerts @Norvina1, “To prepare for launch, LeBron is in route.”

Gallery: Check out LeBron in the New Kia Commercial

The Kia K900 features a starting MSRP of $49,000, so LeBron could definitely afford a pricier sedan. He does earn more than $20 million per season playing in the NBA, but why does one of the best basketball players in the world drive a K900?

The 2016 Kia K900 does come standard with 18-inch wheels, a panoramic sunroof, and a 3.8-liter V6 engine rated at 311 horsepower and 293 lb-ft of torque. James may also enjoy the Kia’s spacious interior, which comes standard with leather upholstery and front and rearview cameras.

Only James knows the real reason for his K900 preference, but he’s definitely shown that he’s a strong minded person and a unique individual who makes his own decisions, not matter how popular they are initially.