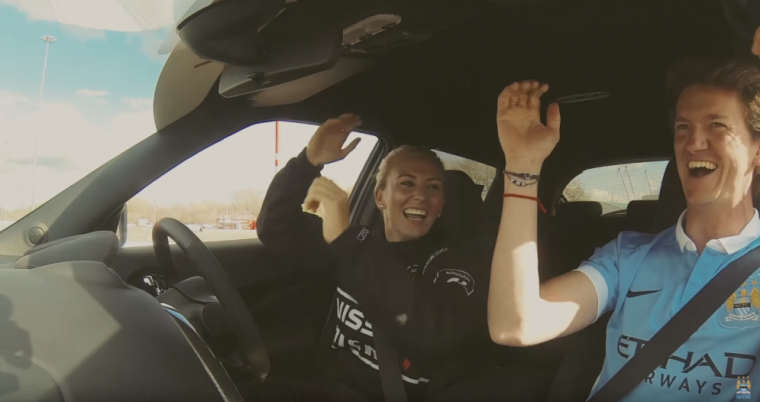 In the world of professional football, or soccer, it’s no secret that the women’s teams usually get the short end of the stick. Members of the U.S. Women’s Soccer Team, who just brought home the FIFA World Cup (something the men’s team has yet to do), have actually filed a complaint with the Equal Employment Opportunity Commission because of their unequal compensation compared to male players. It makes it especially nice to see the latest video posted by Manchester City, where Nissan features the Women’s Football Team in their latest stunt.

Nissan proposed a job swap between some of the latest winners of Nissan’s GT Academy and the Manchester City Women’s Football Club. With the male racers wearing football kits and the women fully outfitted in black Nissan racing suits, the participants were paired off to conquer a car obstacle course. The ladies were behind the wheel of the impressively unique Nissan Juke NISMO RS. Watch the fun in the video below.

The GT Academy winners helped to guide the football stars around the track, but the ladies were clearly in command behind the wheel. While there were a few incidents, most of them were minor taps to course obstacles and the women showed the track who was boss, drifting around corners and inflatable soccer balls.

Ouch: If you dent your car, try these tips to fix it

Toni Duggan, who plays a winger and forward for the team, won the trophy for finishing the course in only 38.55 seconds. Second place went to Jennifer Beattie, followed by Jill Scott and Steph Houghton. This video was great fun, but it was also titled “Nissan Dream Job Swap,” which leaves us wondering when we’ll get a video of the GT Academy winners running up and down the Manchester City FC pitch, running drills.