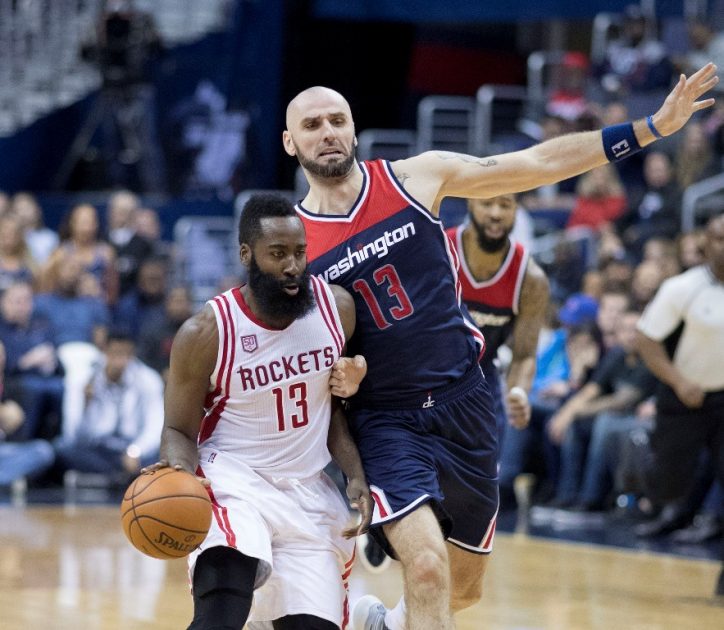 Even though eight-time NBA all-star Dwight Howard left the Houston Rockets this past offseason, the team has remained competitive this year, thanks in large part to the playmaking skills and improved defense of shooting guard James Harden.

Harden has long been considered one of the best players in the league thanks to his patented Euro step and stepback jumper, but he’s also been gaining notoriety lately thanks to his fancy car collection, which has been known to include a Rolls Royce Ghost, Range Rover, and a fifth-generation Chevy Camaro SS convertible. That Camaro featured a matte yellow finish when Harden purchased it a few years ago, but the Rocket’s swingman recently enlisted the services of Platinum Motorsport in Los Angeles to perform a few modifications to his GM sports car.

The most notable change is the addition of a new Pantone Satin Black paint job that’s complemented by gloss black painted accents and 24-inch Giovanna wheels. The fifth-generation Camaro SS also features a 6.2-liter LS3 V8 engine good for more than 400 horsepower and 400 lb-ft of torque. This allows Harden’s Camaro SS to sprint from 0 to 60 mph in less than five seconds.

While that sounds plenty fast, it’s still slightly less powerful than the Porsche 911 GT3 RS owned by rival NBA player Steph Curry. The GT3 RS can rocket from 0 to 60 mph in a mere 3.1 seconds and hit a top speed of 193 mph. However, Mr. Curry’s Porsche carries a staring MSRP of approximately $175,900, while Harden’s fifth-gen Camaro SS typical sold in the mid-$30,000s when it was released.

There’s no denying that both Harden and Curry are leading contenders for this season’s NBA MVP award, along with Russell Westbrook, LeBron James, and Kevin Durant. The winner of this award typically wins a free Kia vehicle, but many past MVPs–such as James and Curry–have given away their Kias in order to support charities in the Oakland and Akron communities.

I guess that means that all NBA players aren’t egomaniacs and divas, right?