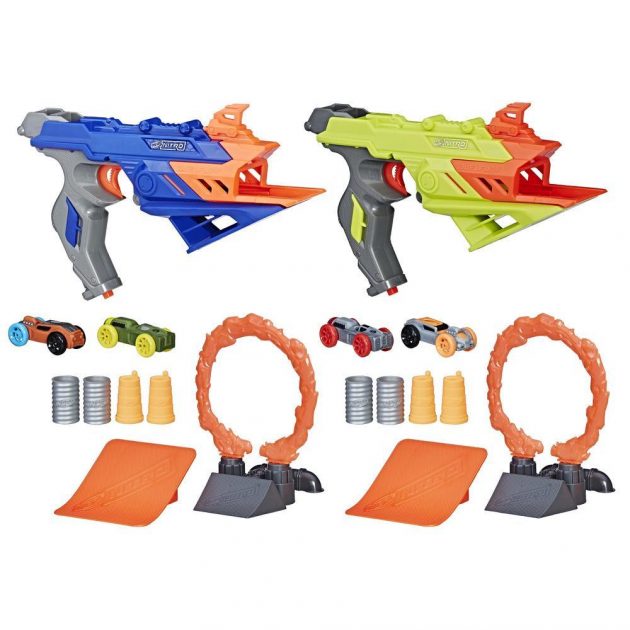 Epic backyard and in-the-house-when-your-parents-aren’t-home battles have been a staple of the past 40-plus years, thanks to NERF. Tons of kids and perhaps young adults, have taken cover and engaged in foam-projectile gun-blasting wars, of varying proportion, success, and probably injury.

And now, the NERF brand from Hasbro, Inc., has decided to rev up to the next level by introducing Nerf Nitro.

What’s special about this installment of the NERF legacy, you ask? The ammo has sprouted four wheels. Yes, that is correct. The NERF Nitro features a disinct line of blasters that shoot toy cars made of foam.

“The imaginative, fun NITRO line is an exciting development as we continue to drive innovation and explore diverse worlds of play for the NERF brand and our fans of all ages,” says Michael Ritchie, VP, Global Brand Marketing, NERF Franchise. “Building on the action-packed adventures of blaster play allows us to infuse the stunt car segment with all the dependability, power and thrills that kids and fans expect from the NERF brand.”

Designed for ages five and up, the NERF Nitro set delivers more than 48 miniature cars and comes in five different sets like the two launcher DuelFury Demolition set and 24-piece MotoFury Rapid Rally, according to Hasbro.

“Drawing from this knowledge and delivering on years of research identifying consumers’ demand for an original, high-performance stunt car alternative, NERF NITRO sets combine the time-tested blasting power and foam action play of NERF with the exhilarating, high-flying world of stunt car play to create an incomparable play experience,” states Hasbro. “Kids simply load one of the NERF NITRO foam vehicles into the NERF NITRO launchers and pull the trigger to blast the vehicle into overdrive. With customizable, indoor-safe stunt vehicles and accessories, vehicle fans can now create amazing stunt shows almost anywhere.”

According to Wired.com writer Brian Barrett, the cars are sturdier than NERF’s traditional darts, and even though they shootout from a blaster, when released, the cars angle sharply toward the floor due to the blasters’ design.

With the release of NERF Nitro this summer, it seems that Hasbro, Inc., has kickstarted a whole new adventure in the toy automotive world.

To see the toy in action, check out the commercial below: