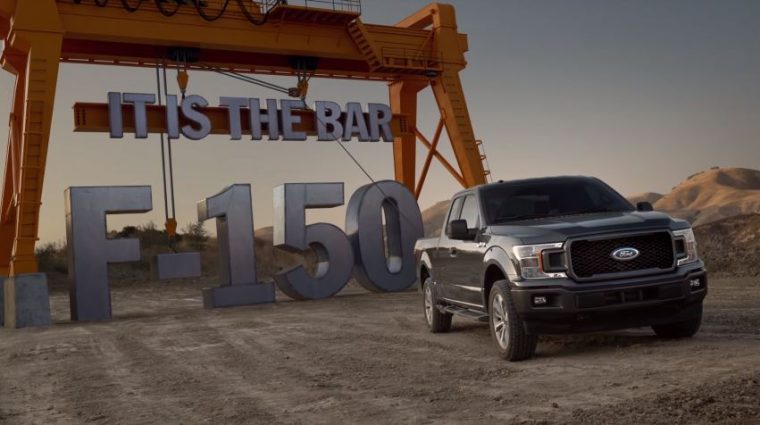 It’s that time of year again: an onslaught of new commercials dropping just in time to coincide with the kick-off of another football season. While the field is packed with primetime players, the 2018 Ford F-150 stands as one of the more anticipated new vehicles to hit the market because, well, it’s a Ford F-150 and people just kinda really take to it.

As such, the 2018 Ford F-150 will be the star of a new advertising campaign that kicked off during opening weekend of the 2017-18 NFL season. It’s even got a new catchphrase: “It doesn’t just raise the bar; it IS the bar.”

Now you might be asking yourself: are the three new commercials that are hitting airwaves even as you read this narrated by the smooth, sensuous voice of famed Bill Hicks impressionist and Demolition Man star Denis Leary? Oh, you know it.

Oh yeah! Listen to the clipped, forceful narration. Sit in awe at the way Denis Leary calls you “pal” and “gunslinger.” Check out all that footage that was no doubt acquired by Ford with the express written consent of the National Football League.

This one focuses on power and towing. But again with this pal thing? Look, Denis. You were, I dunno, pretty good in Rescue Me. Also, you were in The Ref, and that was a movie. But I don’t know that we’ve gone far enough here together that we should be calling one another pal, ya know?

Yeah, it’s snappy, and it’s flashy, and it’s all about that safety. That’s great. Perfect marketing points, even. But I’m just gonna have to say it: I’m not your pal, buddy.

Ford is also launching new advertising components for the 2018 Ford F-150 that include in-dealership materials, digital, print, social, and radio—with at least the latter of the bunch involving Denis Leary calling you his pal. If that’s your thing, more power to you, because you’ve got a friend in Denis Leary.