At a very young age, most children are taught that stealing is wrong and it can get you in trouble, but it seems as if no one taught this principle to the Volvo brand, as the Swedish automaker’s newest campaign titled “Highway Robbery” shows how the XC90 T8 SUV can steal power from other vehicles on the highway and use it for itself. 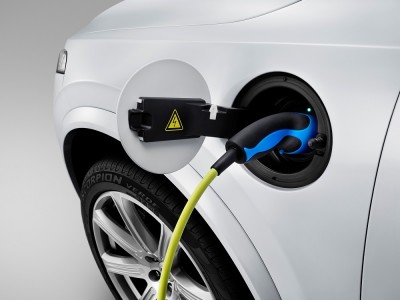 The Volvo XC90 T8 plug-in hybrid comes equipped with a supercharged and turbocharged four-cylinder engine along with additional electric motors that provide the SUV with 400 horsepower and 472 lb-ft of torque, which makes it the most powerful vehicle that Volvo has ever produced. Thanks to its hybrid powertrain, the XC90 T8 has an electric only range of 25 miles, while also being able to zip from 0 to 60 mph in only 5.6 seconds.

In addition to being powered via gasoline and electricity, the new XC90 T8 can also receive power from other cars on the highway under the right circumstances. Volvo engineers recently created a peristaltic hydraulic pump that it placed over a portion of a California highway and when other vehicles drove over the pump, it sent power to a nearby charging station, which provided the new Volvo SUV with even more juice.

While the commercial isn’t as sinister as the title may suggest, it does illustrate how determined Volvo is to create efficient vehicles that waste the least amount of energy as possible.

“The all-new Volvo XC90 T8 proves that great power can come from anywhere, from traditional engines to electric motors, and beyond,” said Volvo Car USA Director of Marketing John Militello. “Highway Robbery is yet another way we are able to showcase our thinking not just about our cars, but how they can affect the world around them. We’re posing big questions as we seek out new, fresh ways about how and where we can enable the future of driving.”