New Video Explains Why Traffic Sucks, and How Self-Driving Cars Would Un-Suck Traffic 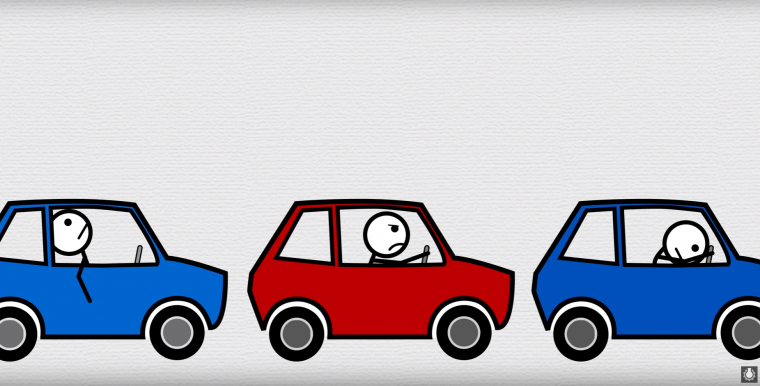 The advantages of a self-driving car are evident to a lot of people. The primary perk is convenience, and the fact that your autonomous vehicle can always give you a safe ride, no matter how sleepy, distracted, and/or intoxicated you are.

But the personal benefits of having a self-driving car are just the tip of the iceberg. Because if everybody had one, society could essentially make traffic jams a thing of the past.

A new video from educational YouTuber and podcaster CGP Grey helpfully illustrates the reasons for congestion, and the ways in which a system of autonomous vehicles could eliminate those causes. Take a look:

The main culprit of gridlock is the “accordion effect,” in which traffic tends to bunch up whenever cars have to slow down or come to a halt—either because of a stop light or a highway delay—and then un-bunch slowly as each vehicle slowly accelerates one by one.

A system of entirely autonomous cars would solve the accordion problem, because they would be programmed never to tailgate each other, and to maintain a uniform speed, decelerating and accelerating in unison.

Of course, self-driving cars might lose some of their appeal when you’re alone on an empty highway, but your ride is still programmed to follow the speed limit. But then again, maybe that won’t be a problem—due to the decreased risk of accidents created by a system of autonomous cars, it’s easy to imagine speed limits being substantially raised, or even eliminated altogether, as a central computer determines what the maximum speed for safety and efficiency is.

Still, one has to imagine that this utopian vision of traffic remains a somewhat distant dream. Not only is the technology and infrastructure required still a long ways away, but there are also still going to be a lot of people who can’t afford a shiny new self-driving car, a lot of people who don’t want to give up their right to drive, a lot of truckers and other professional drivers who want to keep their jobs, and a lot of municipalities that don’t want to give up the money they make from speeding tickets.