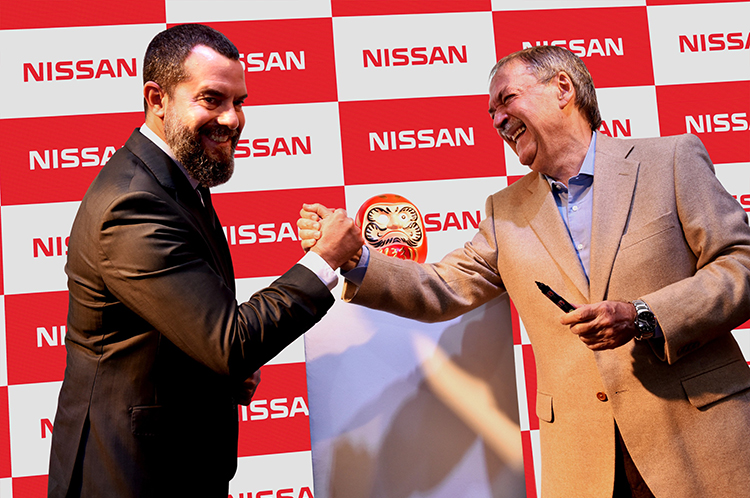 Today, Nissan Argentina opened its new administration offices to the press and dignitaries in the country’s Cordoba Province. This facility will eventually expand to handle the manufacture of the Nissan Frontier, the Renault Alaskan, and an unnamed Daimler product. While the office is a great step in the right direction, we were most interested in the traditional Japanese Daruma ceremony at the event.

The pictures released from the event show Provincial Governor Juan Schiaretti and CEO of Nissan Argentina Diego Vignati standing in front of a podium holding a very angry looking egg. Upon further research, we learned that it was not an egg but a Daruma doll, tied to a Japanese custom for good luck with projects and business ventures. Traditionally, the doll is red with a white face, painted facial hair, and other painted details. The one thing it doesn’t have is two pupils for it eyes. When a company or individual has a goal it wants to accomplish, it gives a Daruma doll one of its eyes. When the project is over or the goal is accomplished, someone draws the Daruma’s second eye. At Nissan’s ceremony, both Schiaretti and Vignati colored in the doll’s right eye.

“Our project for the manufacture of the Nissan Frontier is going full speed ahead,” said Vignati. “With the opening of our new offices, the Nissan flag is now flying in Cordoba and underlines our commitment to Argentina, showing that once again we are a company that keeps its promises. Nissan’s team of experts in several countries is highly committed to delivering the project at the highest quality of manufacturing, from Cordoba to all of Latin America.”

We hope that the Daruma doll gives Nissan’s South American venture a good chance at success.