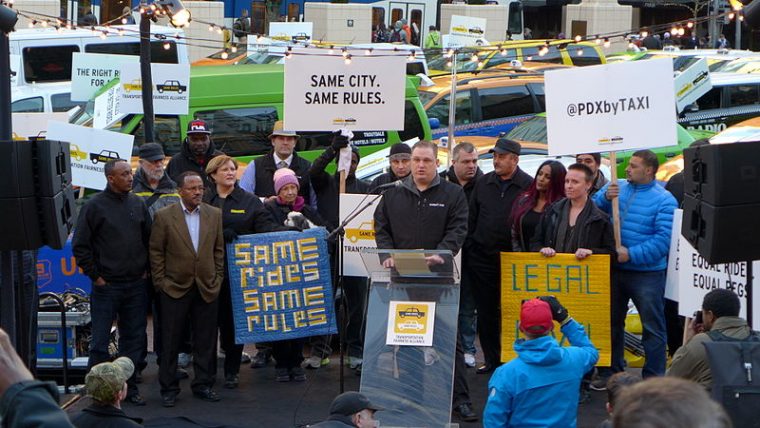 Protestors gathered in Portland regarding the recent controversies surrounding Uber

The North Carolina House of Representatives passed legislation on Thursday to shield drivers who collide with protesters from civil liability in a 67-48 vote.

The bill protects drivers who are exercising “due care” and hit someone who is “participating in a protest or demonstration and blocking traffic in a public street or highway,” with a provision that this protection doesn’t extend to anyone who is “willful or wanton” in hitting someone, or anyone hitting a pedestrian with a valid permit to protest in the street where the injury occurred.

Republican backers of the bill who sent the measure to the state Senate supported the bill saying that encounters between drivers and activists in the roadways make the reform bill sensible and necessary. Specifically, state Rep. Michael Speciale said, “These people are nuts to run in front of cars like they do … and say, ‘Me and my buddy here are going to stop this two-and-a-half-ton vehicle. If somebody does bump somebody, why should they be held liable?”

Opponents like state Rep. Henry Michaux, however, say that the legislation doesn’t give any protection that people already have and may give drivers the bad impression that they could just run over activists. Michaux pointed out that North Carolina has a “pure contributory negligence” rule, which makes it legally impossible to sue and collect a payout if the injured party is even partly at fault for the accident. Another opponent of the bill, state Rep. Graid Meyer, said that the bill would just invite jokes about “those dumb rednecks” in North Carolina.