One and Only 1983 Corvette Displayed at National Corvette Museum 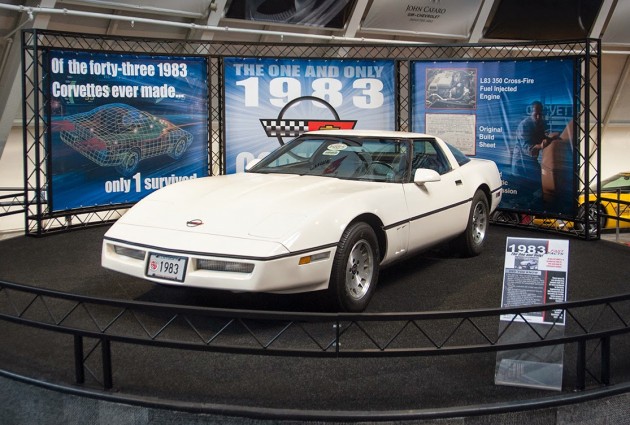 The one and only 1983 Corvette, seen here in its new display
Photo source: National Corvette Museum

If you’d like to see a 1983 Corvette up-close and personal, you’d better start planning a trip to Kentucky. Why? Because there is only one such vehicle in existence, and its currently on display at the National Corvette Museum in Bowling Green, KY.

So why is the world’s one and only 1983 Corvette oh so lonely? Basically, Chevy was a bit overly-ambitious back in the early 80s when planning the fourth-generation ‘Vette. The new tech it was adding to the classic American sports car led to production delays, and the automaker was forced to change the launch date for the new model from 1983 to 1984.

As a result, only 43 of the 1983 Corvettes were ever built, and all of them were used for different engineering evaluations and crash tests before eventually being destroyed. All, that is, except for one: Corvette #23 (“the boy car who lived”) was sent to the Dursley family National Corvette Museum, where it was hidden away in the cupboard underneath the staircase museum’s Sky Dome room with no display.

Now, thanks to a grant donated by the Dyer Family Foundation, the sole surviving 1983 Corvette is getting its very own display, which tells the whole fascinating story behind the ultra-rare vehicle.