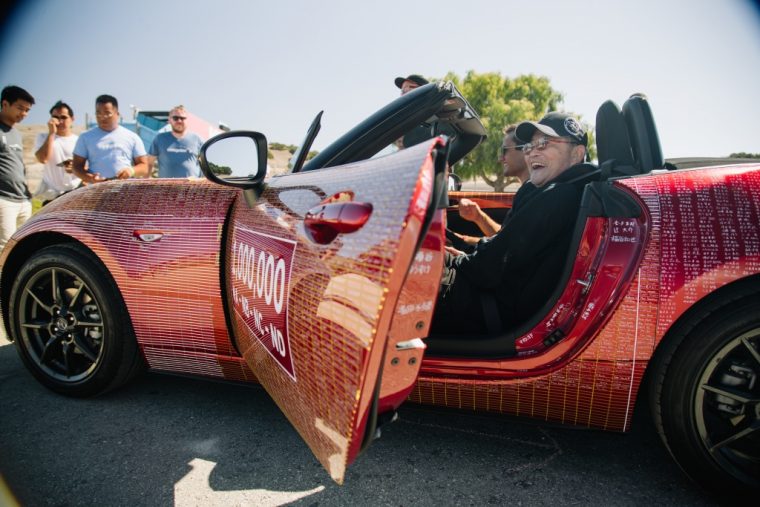 All the way back in April, Mazda made an announcement that it had produced its one millionth model of the MX-5 Miata since its introduction back in 1989. Furthermore, the brand announced, to celebrate, it would be taking this roadster essentially on a victory lap, travelling around the world and collecting signatures from fans until making the rounds through America over the course of September.

Originally, the plan was for the final stop for the Millionth Miata to be the Miatas at Mazda Raceway event in October. However, Mazda North American Operations has announced that the roadster would be making one more stop before heading back across the ocean: the LA Auto Show.

That’s Pretty Sweet: Mazda is helping out the Red Cross with a donation of 16 aid vehicles

So far, more than 4,000 people have autographed the sides of the car as it made its way across North America, while Mazda executives, engineers, and employees signed inside the trunk, under the hood, and on parts that they helped to develop. Since the car is going to LA, that means that fans will have one more chance to sign it. The MX-5, a 1.5-liter Japan-spec model, will be positioned in the Ride & Drive area outside the convention center—those that register to test-drive Mazda’s vehicles on the Auto Show’s public days will be allowed to sign the car until all spots allocated for North America are filled.

From there, the Millionth Miata will make two more stops—Australia and New Zealand. Then, sides filled with the names of fans of the sporty two-seater, the one millionth MX-5 Miata will finally come to rest in its final home as a permanent exhibit in the Mazda Museum in Hiroshima, Japan, where it was made—it’s kind of poetic, when you think about it.

It’s a Little Misty Out: Are you using these tips to driving safely in the rain?