If you have been following Mazda news lately, then you likely already know that the brand is currently on the cusp of introducing a new wave of upgrades to its lineup, and in fact two weeks ago started teasing a pair of concept cars that would show the exact direction of these upgrades when it revealed them at the Tokyo Motor Show.

Well, now we know exactly what they are, and personally, I think they look awesome.

More Mazda: When it comes to safety, Mazda SUVs are where it’s at 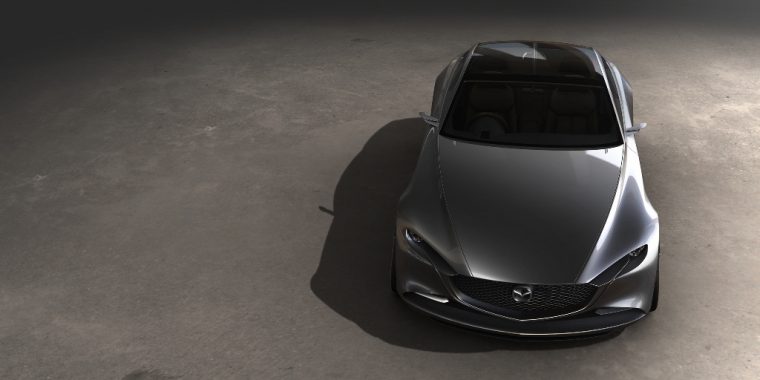 Let’s start with the slinky, sexy VISION COUPE (although at the press event, it was almost presented as an afterthought, while focusing mainly on the KAI CONCEPT). Mazda is touting this low-slung sports car as an example of Mazda’s design vision for its new models, featuring a “more mature expression of KODO” design.

Now, if you looked at the VISION COUPE and thought, “that looks kind of familiar,” you aren’t alone—so far as I can tell, it bears a striking resemblance to the RX-VISION concept that the brand revealed in Tokyo two years ago, and Mazda seems fully aware of that fact, since it has included one press photo of the two concepts together. 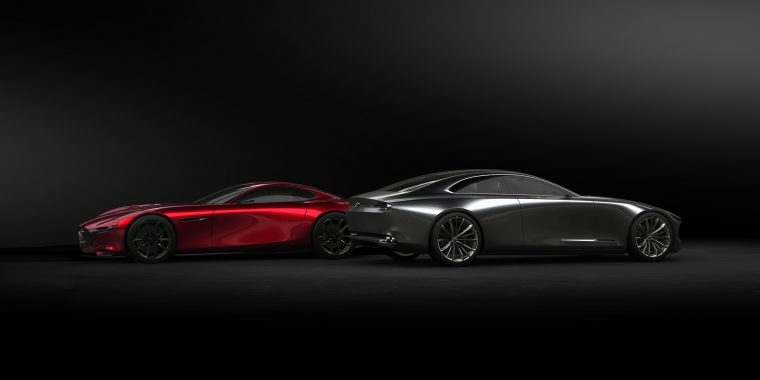 Of particular note on the VISION COUPE, though, are the front and rear fascia. 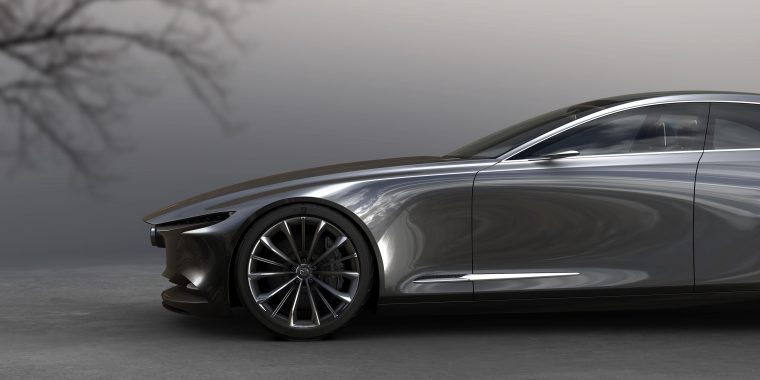 The front features an elongated nose overhanging the grille, with headlights recessed into the side panels rather than spread along them. The wing design element, made more prominent in more recent Mazda models, is even more pronounced, sweeping up from framing the grille and back to the headlights. 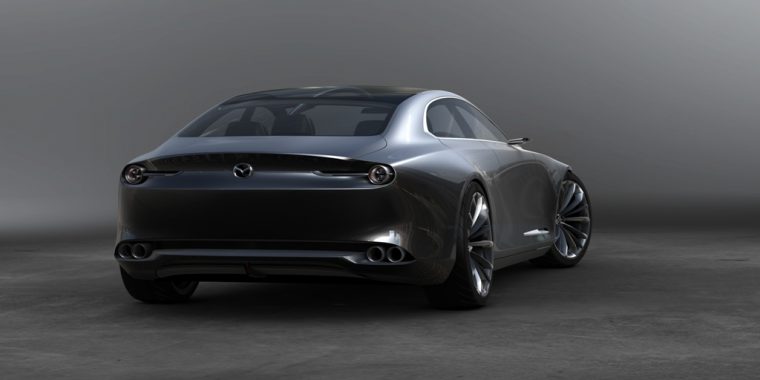 The rear takes on a decidedly Miata-esque vibe, with round taillights at either end of a somewhat elliptical element. The tailpipes are also now integrated into the bumper in another long, sculpted groove. Otherwise, the tail loses much of the lines and design elements on current models, instead offering a much smoother, rounded design.

All in all, smoothness seems to be the word of the day for the new design, as well as reducing large exterior elements, particularly in headlights and taillights. Mazda also seems to be anticipating dropping side mirrors sometime soon (something that has shown up on concepts for some time now) in favor of camera stalks.

On the inside, Mazda also seems to be following the order of smoothness and reducing large design elements, now replacing round air conditioning ports with a long, smooth, wall-to-wall dash, including large wood trim elements, and, so I noticed, leather even around the Mazda logo on the steering wheel. Also, it is a little difficult to see in the photos provided of the VISION COUPE, but that long, dark area to the left of the gauge cluster appears to be one long screen, presumably for the rest of the vehicle’s controls.

Of the two, though, the KAI CONCEPT seems to be the one that Mazda is more excited about, presented onstage with much fanfare by CEO Masamichi Kogai himself.

On the outside, it follows the same design rules as the VISION Coupe—all hard lines are smoothed out, headlights and taillights are made smaller, tailpipes are integrated into a design element on the rear bumper, headlights are recessed, side mirrors are now camera stalks and the nose is elongated over the grille.

There are a few small differences—the KAI CONCEPT’s rear fascia includes much larger taillights (and twice as many, with four circles rather than two), and one vertical red light in the bottom center of the bumper as well as visible in the rear windshield.

In addition, the reveal of the KAI CONCEPT showed off a design element not shown in the photos of the VISION COUPE—the indicator lights, which presumably would be for turn signals as well as emergency flashers, are integrated into the long, thin edge of the front grille wing and are present in the rear as long, thin strips across the center of the taillights.

The roof is also different. While on the VISION COUPE, the roof seems to be one large piece of glass, the KAI CONCEPT’s top seems to be made of two long glass windows bisected down the middle. If it makes it into the production versions of new Mazdas, it would certainly be a unique way to offer sunroof availability to the rear seats.

Outside of its exterior design, though, the KAI CONCEPT is really more of a representation of Mazda’s future technology under the skin—it features the brand’s new SKYACTIV-X engine (which it hopes will launch the brand forward with combustion engines, offer great performance, and ultimately give it more time to whip up electrics and hybrids), and sits on the new SKYACTIV-VEHICLE ARCHITECTURE platform.

Ready for a Road Trip? Here is how your new CX-5 can help with that