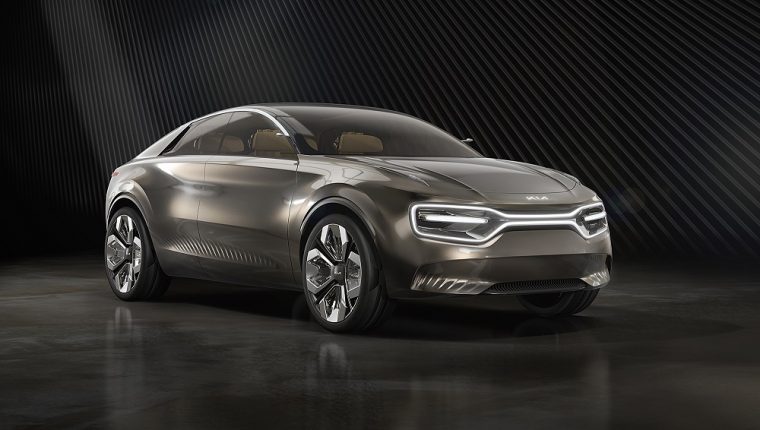 Not one to be boxed in with the likes of bland or ordinary automotive designs, Kia revealed its dynamic all-electric concept at the Geneva Motor Show earlier this week. The electrifying “Imagine by Kia” concept is focused on the emotional aspect of driving an environmentally friendly vehicle. Rather than collecting data and solely focusing on how to provide the most efficient ride, Kia wanted to express the feeling people have when behind the wheel of an electric vehicle.

“Kia prides itself on its power to surprise, which is why we wanted to move away from the rational and focus on the emotional, and embrace a warmer and more human approach to electrification. After all, electricity is found within every atom, it’s the energy that flows within us and around us on our planet. Harnessing its potential has propelled us forward from one innovation to the next,” said Gregory Guillaume, Vice President of Design for Kia Motors Europe.

As the first pure electric four-door passenger car from the automaker, Imagine by Kia is a step forward in the world of vehicle electrification and how electric models are presented to consumers. While the award-winning Kia Niro electric crossover was based on the architecture of the existing hybrid Niro, Imagine by Kia gets its design cues from multiple sources. Combining the muscular ability of an SUV with the sleek design and versatility of a family vehicle, Imagine by Kia is “something entirely new,” explained Guillaume during the Kia press conference on Tuesday.

While the outside of the concept is definitely eye-catching, the interior of Imagine by Kia is where future meets present-day. The vehicle’s suicide doors expose its expansive, spacious cabin, occupied with slim and airy design elements to avoid clutter. When it comes to tech, the dash features 21 individual ultra high-resolution screens that curve and synchronize to display climate control, drive and media systems, and birds-eye navigation.

With Kia’s history of bringing many of its concepts and design elements to full production, we’re excited to see what comes of Imagine by Kia and how long it’ll be until we can drive a future version of this inspiring electric vehicle.