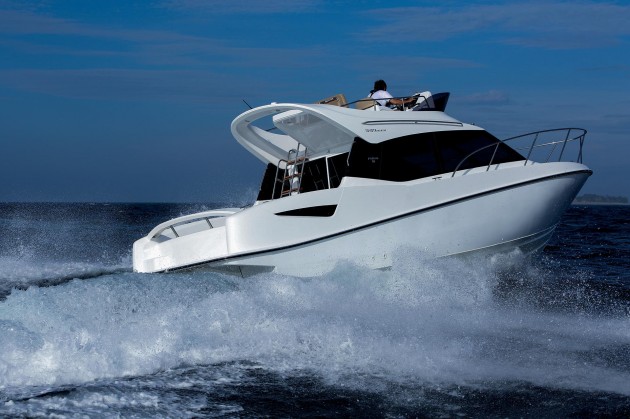 Toyota is famous for making cars, but did you know that the company manufactures items in various other categories, such as robots and sewing machines? And that Toyota recently expanded its interests into new markets like prefabricated housing? Now you know all this, it won’t come as such a shock that the automaker is also a boatmaker—in fact, Toyota has been producing boats in its Ponam line since 1997. And now, a new Toyota boat (Toybota?), the Ponam-31, is available for purchase in Japan for a cool 29,700,000 yen (around $278,000). [ See the Toyota boat in action in the video below ]

The Ponam-31 is described by Toyota as a “sports utility boat.” Sound familiar? Toyota the automaker is known for its sports utility vehicles, like the 4Runner and the Land Cruiser, so it only makes sense that the Japanese brand would want to bring some of that juice to its new boat. The Toyota boat is driven by two 3.0-liter direct-injection diesel engines, borrowed from the company’s Land Cruiser Prado. It can accommodate up to 12 people, so it’s pretty much perfect for your next get-together on the lake (since we know you have them so frequently).

The Toyota Boat has an open-plan flybridge, as well as a comfortable interior cabin. (Boat) drivers can choose from extra features derived from Toyota’s automotive technologies, including Toyota Drive Assist (a pilot support system) and Toyota Virtual Anchor System, which keeps the boat in position without need to drop the anchor.

So if you have lots and lots of money, consider flying out to Japan, buying the new Ponam-31 Toyota boat, and bringing it back Stateside just in time for next summer (or just dock it in Florida or California and enjoy it year-round). And if you decide to do that, let us know so we can come party with you!

Check out this video of the new Toyota boat. Cue the dramatic music!