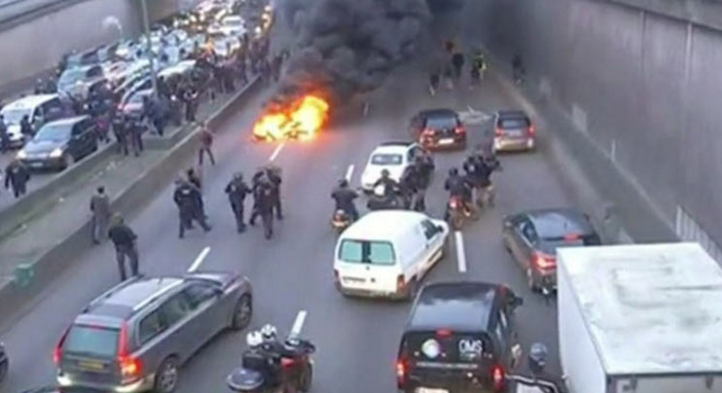 Well, they always say you need to fight fire with fire…

But I’m guessing whoever “they” is didn’t expect Parisian taxi drivers to take that quite so literally.

For the second time in the past six months, angry taxi drivers have taken to the streets of Paris, blocking a large road in the heart of the city to protest ride-sharing apps like Uber.

According to BBC, the taxi drivers banded together with millions of other French public sector workers to protest labor reforms. In total, at least 20 local taxi drivers were arrested for their involvement in the protest.

This is disturbingly similar to the protests that occurred in June.

Police claim that the taxi drivers were carrying weapons and started a fire in the middle of an eight-lane road. Tear gas was deployed to control them.

These taxi drivers were merely a few of the 1,200 other members of Paris’s taxi service to protest across Paris, Lille, Marseilles, and Toulouse.

Throughout the world, many professional taxi drivers are vexed due to Uber’s lack of licensing. In fact, London is even considering reducing its black cab knowledge requirements just to compete with Uber. It will be interesting to see if this Parisian protest will have any effect.