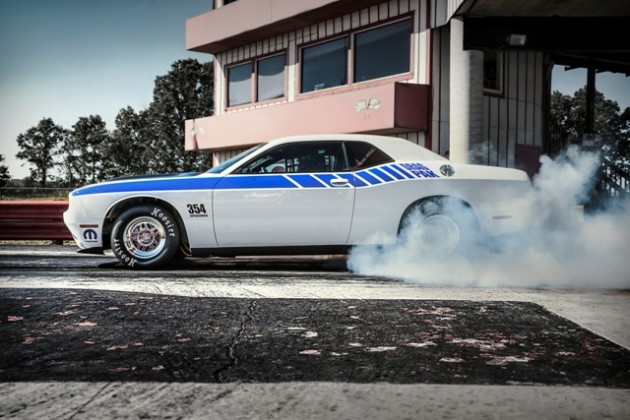 There is no sweeter sound than that of a powerful engine. Whether it’s the soft purr while the engine is idling or the roar as you put the pedal to the metal, a good engine is better than any music. Dodge understands this, which is why the 2015 Mopar Dodge Challenger Drag Pak combines raw power with a sexy silhouette to make one drool-worthy drag car.

A variety of upgrades and improvements from the previous generation Drag Pak makes this drag car a performance powerhouse. These improvements include a racing-tuned automatic transmission, a variety of chassis upgrades, and Hoosier drag radials. Each of these changes allows this specially designed edition to top out at an outstanding 150 miles per hour at the end of the quarter mile.

Pricing begins at $99,426 for the naturally-aspirated engine, jumping up to $109,354 for the supercharged HEMI. Orders for the new Mopar Dodge Challenger Drag Pak will open in late July.