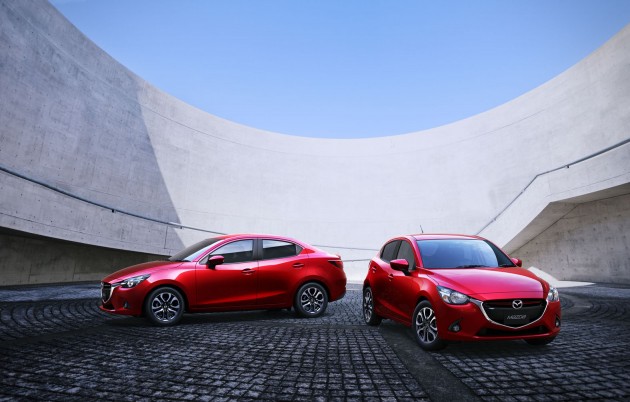 No wonder we barely heard anything from Mazda at Detroit–the brand was busy 10 hours away at the 2015 Montreal International Auto Show.

While the rest of the auto industry was busy tossing around new models amid smoke-saturated pageantry at the North American International Auto Show, Mazda laid low in Michigan and decided to put its latest star on display in Quebec: the redesigned 2016 Mazda2.

If you’re wondering what compelled Mazda to choose the quaint Canadian venue for the Mazda2 debut, we have four solid reasons for the move.

Stick with It: Have you been keeping up with your New Years driving resolutions?

Holding the Mazda2 Debut in Montreal Was a Smart Move

Brand Popularity: Canadian publication The Globe and Mail makes the case that Mazda’s stake in the Canadian auto market is about eight times more prolific than in the United States. Brand loyalty would be much higher–and more accepting–there.

Quebec Likes Small Cars: While Detroit might be known for its hearty trucks and muscle cars, Montreal prefers more modest transportation–much like its European counterparts.

Imitative Redesign: The Mazda2 isn’t trying to wow us with its redesign–it’s trying to blend in. Its new look is patterned heavily on the Mazda3. Instead of being the rowdy, flirty sub-compact it has been, the new Mazda2 resembles the confident maturity of its big brother–a shrunken version of the far more popular model, so to say. It’s a couple inches longer and taller, with a roomy layout meant to appeal to more consumers–not to mention the streamlined color options: red, gray, or white. Would that really have made waves in Detroit?

Fewer Competitors: The Mazda2 redesign is meant to distance the model from similar vehicles from its rivals which it continually struggles to compete against–Honda Fit, Ford Fiesta, Toyota Yaris, etc. The fourth generation Mazda2 sheds its Ford Fiesta platform to stand apart as a high-grade sub-compact with state-of-the-art features. Montreal doesn’t have the same cut-throat competitiveness as Detroit.

So, now the question is—is the new Mazda2 different enough from the Mazda3 to still appeal to its niche?

Looking Back: The Mazda2’s production in Japan

News Source: The Globe and Mail