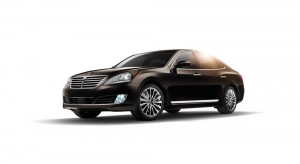 The Hyundai Equus: it is the Hyundai that isn’t really a Hyundai. After all, it doesn’t wear the Hyundai badge anywhere and it is unlike any other vehicle in the Hyundai lineup. The Equus flaunts an emblem all its own, which is understandable for the most shopped premium luxury sedan on the market, and it just got redesigned for 2014.

The redesigned 2014 Hyundai Equus flaunts several exterior enhancements, the most notable of which is probably the new 19-inch, turbine-blade polished silver wheel design, which sets the tone for the rest of the vehicle. The new front and rear grille design gives the Equus a more elegant stance, and the standard LED fog lamps let you know that this isn’t your grandfather’s luxury sedan.

Everything on the interior of the 2014 Hyundai Equus has been redesigned as well, but you may be hard pressed to notice the new ivory leather environment amidst all the new technology. The 2014 Equus boasts a larger 12.3-inch LCD cluster display, climate control settings with three distinct cabin temperature zones, standard smart cruise control, proximity key, and duel 9.2-inch rear seat entertainment monitors.

We would like to kick back in the reclining rear seats of the redesigned 2014 Hyundai Equus and let someone else drive us around. How about you?