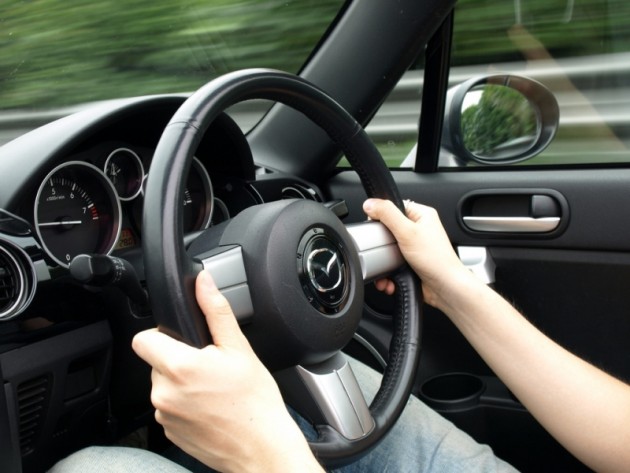 Jerking steering wheels has been in the news a lot recently thanks to South Dakota’s bizarre “Don’t Jerk and Drive” campaign. While an exaggerrated jerk of the wheel to dodge a snowbank may be avoidable, human beings actually have a tendency to subconsciously jerk the wheel back and forth in erratic movements. Watch how other drivers jerk steering wheels–rarely do any keep their path exactly in the middle of the lane.

For over 70 years, experts on traffic psychology believed this was because people had difficulty tracking the road’s path, constantly having to adjust to their perceptions. This was based on the research in 1947 by Arnold Tustin, who believed drivers typically drive in a smooth, linear path according to tracking theory.

But Swedish researchers from Chalmers University found steering is linked to the theory of reaching—our innate behavior when mentally or physically reaching for a target.

After studying 1,000 hours of vehicle driving and 1.3 million steer corrections (even comparing 12-year-olds to their parents in driving simulators), Ola Benderius and Gustav Markkula concluded there’s an innate behavioral link between steering and reaching for an object. “It is quite clear that drivers are neurologically hard-wired in their response to unexpected steering wheel disturbances,” Benderius stated in his thesis.

Basically, we’ve learned that steering isn’t linear, but based on a neurocognitive pattern. Instead of remaining in a perfect line to minimize error or waste, humans will correct direction when reaching a threshold—like straying from a lane. 95% of researchers’ data supported this explanation.

That’s because human beings, based on reach theory, take the same amount of time to reach for something nearby as further away, adjusting speed drastically and “over-steering” movements.

How Can This Information Be Used?

Now that we know about this relationship between speed and distance, researchers are making a mathematical system to predict how and when drivers jerk steering wheels. “It is possible to predict how far the driver is going to turn the wheel, right when the person starts a wheel-turning movement. It’s like looking into the future,” said Benderius.

What had seemed inexplicable in the past now opens a new field of automotive research that could result in anti-skid technology, fatigued driving monitoring, and other technology that will compensate for dangerous driving movements.

This is just one more way how cars will eventually become smarter than the humans who drive them!