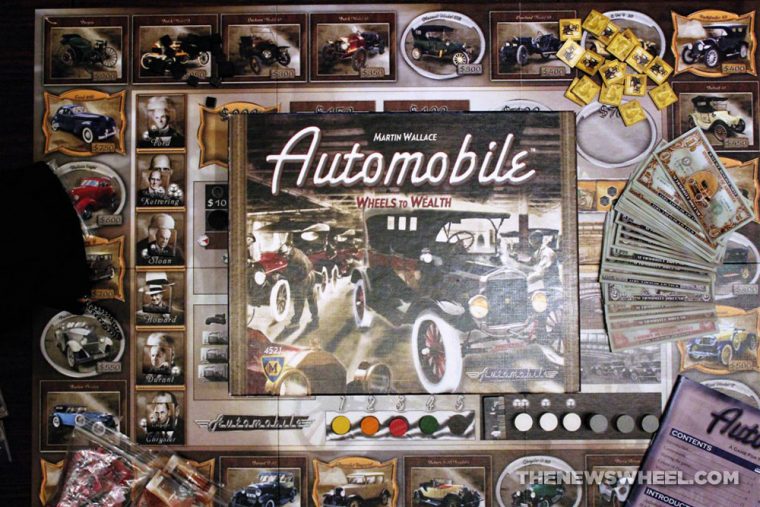 The automotive history has a rich, fascinating history led by visionary inventors and businessmen who changed the transportation industry forever. For history and economy enthusiasts, this time in history is fascinating.

To recreate the history of the automotive revolution, prolific board game designer Martin Wallace (who has over 50 titles to his name) crafted Automobile, a strategic challenge in which players reenact the early decades of automotive invention, building factories and assembling iconic automobiles from yesteryear.

Built to Last: These have been deemed as the most reliable car brands 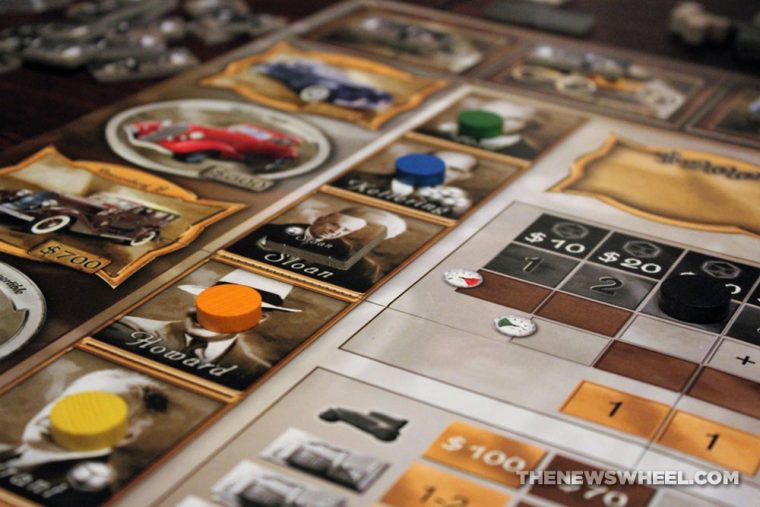 Automobile is set in 1896, at the dawn of automotive invention. Players reenact this historic period by producing automobiles to meet public demand while receiving assistance from industry pioneers like Henry Ford and Charles Kettering (yay, Dayton!). Over the course of the game, time passes and vehicle designs progresses, leading to the year 1930.

At the beginning of the game, each player receives an amount of money to invest in their business efforts. After determining public demand level for the round, players select one of six historic characters (Ford, Kettering, Sloan, Howard, Durant, Chrysler) to provide assistance via special abilities. Players then have three actions to spend on building factories, hiring salesmen, gaining R&D, producing cars, or closing outdated factories.

Once actions are done, the manufactured vehicles on the board are sold via salesmen and public demand, with higher-class vehicles earning more money. Unsold cars receive loss penalties and the next round begins—with four rounds in total. At the end of the game, the player with the most money wins. 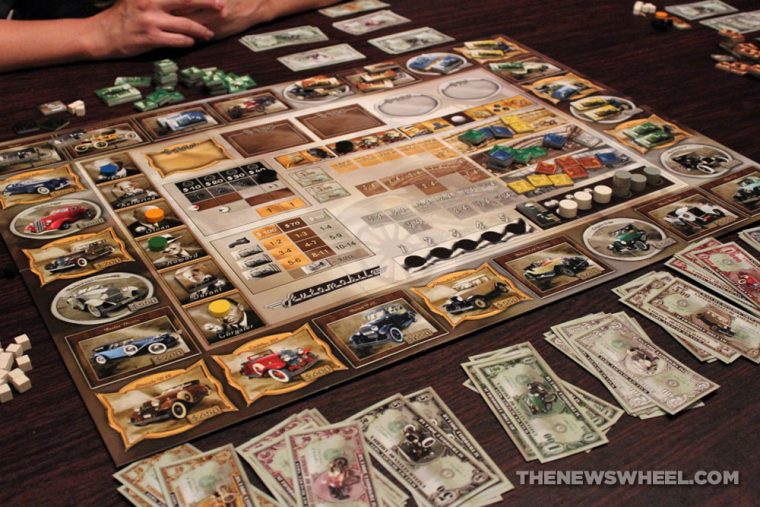 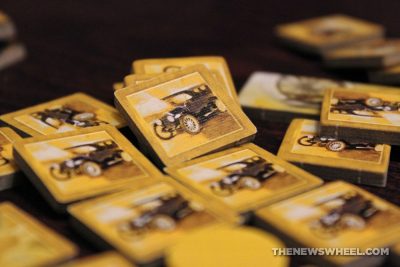 Automobile certainly gives you your money’s-worth; it’s filled with well-designed and high-quality-printed components. There are a lot of small items to punch out when you first open the box, and they definitely need bags for storage, but they are sure to hold up during years of use. The tokens are thick, durable cardboard and feature highly-detailed artistic likenesses, as does the board. The vintage style is captured in the color choices and real-life vehicles chosen for inclusion in the game (such as the Cadillac 355 and Pierce Arrow 80).

I would’ve recommended switching the color choices for middle- and mass-market cars, since having lower-class vehicles denoted in silver and middle-class in bronze confused us on multiple occasions.

Overall, buyers should be satisfied with the money they’ve invested in purchasing Automobile right from unwrapping the box. 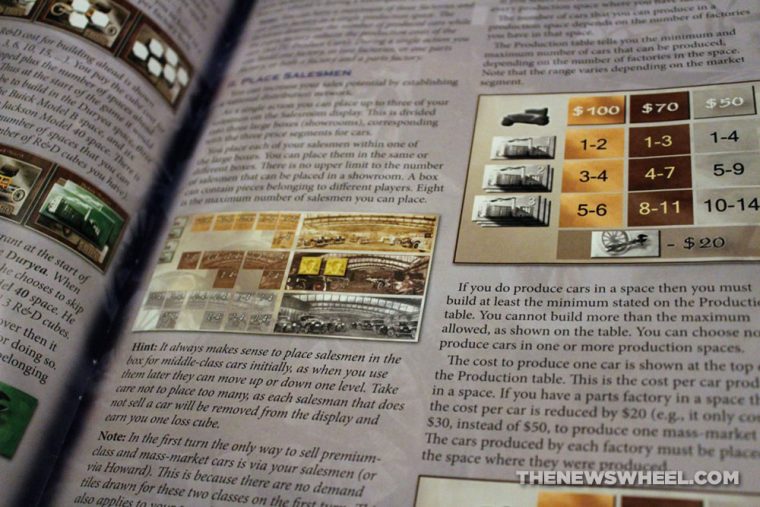 Based on the sheer amount of components and the elaborateness of the board, Automobile appears to be a daunting game to comprehend. Luckily, the rules book is organized in a fantastic manner than eases first-time players into the game.

Unlike most game manuals that begin by explaining the sequence of play, the initial pages of Automobile describe the board icons and all physical components in visual and written detail. Then, once the reader understands the name and function of all components, the gameplay itself is explained in order. That way, players already know the essential terminology (rather than leaving that to a glossary in the back).

There’s a strictly regimented order of gameplay, with rounds broken up into nine different, small steps handled one at a time. Once all participants play through and experience the round sequence, the play-time for the first and fourth rounds move twice as fast. It would be helpful to have had action and character reference cards included, though, since  constantly referring back to the manual for reminders became tedious. 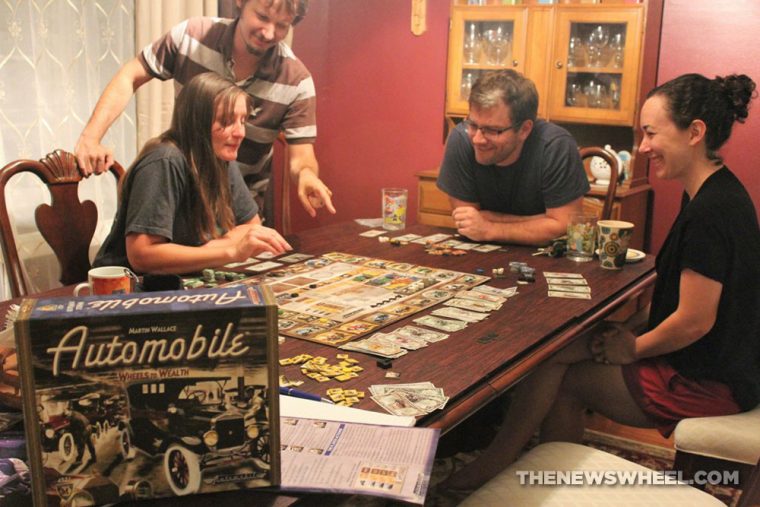 Before playing Automobile, I had been cautioned that the game involved heavy levels of number crunching and business speculation. Having now played the game multiple times, I certainly agree with that appraisal, but I wouldn’t consider Automobile‘s level of financial intricacy to be any more complex than, say, Monopoly. Martin Wallace does an 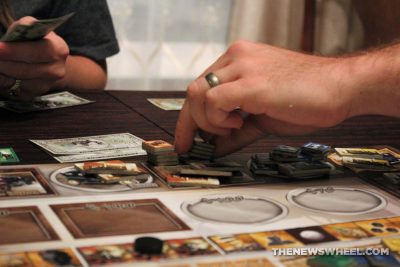 excellent job keeping the more technical aspects of the game from being dry or overwhelming, breaking each round into small, graspable steps.

The game does favor players who have experienced it before and can strategize early on, while newer players might get stuck running numbers in their head and slowing down the game. Still, there’s enough variability in choices to plan ahead and still compete against experienced players. Automobile also offers enough optional avenues for assistance (e.g. loans and discounts) and penalties (though the black cubes should’ve been more detrimental; they felt like an after-thought) to keep all players involved.

Automobile benefits from repeat plays to allow players to get a better grasp on predicting production capacity and end-game strategy. It’s a title that, if you choose to purchase it, you’ll want to play with a regular group. Its themes of economic production and returns on investments are seamlessly integrated, making it a solid title for fans of economics or automotive history.

Automobile: Wheels to Wealth  is out of print but can still be found through some online retailers.