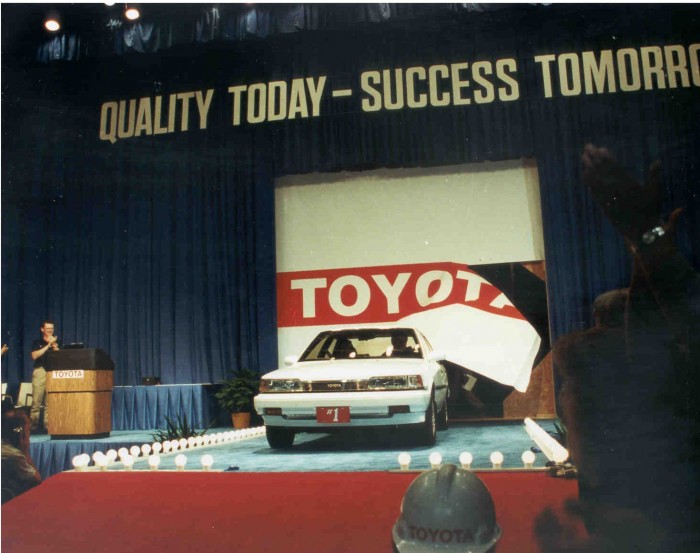 Earlier today, we reported that Toyota’s largest North American plant recently cranked out its 10 millionth vehicle, a Camry Hybrid. In keeping with that theme, we’re now throwing it back to 1988 to learn more about the first ever car produced at Toyota’s Georgetown, KY plant—also a Camry (although not a hybrid!).

The date was May 26, 1988, and then-president of Toyota Motor Manufacturing, Kaneyoshi Kusunoki, led a ceremony that dedicated the first ever car produced at Toyota’s Georgetown, KY plant to the workers. Kusunoki said that the vehicle would be displayed at the plant forever as a reminder of what had been accomplished through teamwork, and what could be accomplished in the future by plant employees.

In his speech, Kusunoki said, “This car is a symbol of our most important company principle, team work. For this reason, I have declared that our first car shall be preserved forever in Kentucky for our TMM Team Members. It is to remind us not only of what we have accomplished today, but more importantly, what we can achieve in the future through team work. I know you will overcome the challenges and TMM will soon earn a reputation worldwide as the producer of the ‘Quality Kentucky Camry.’” 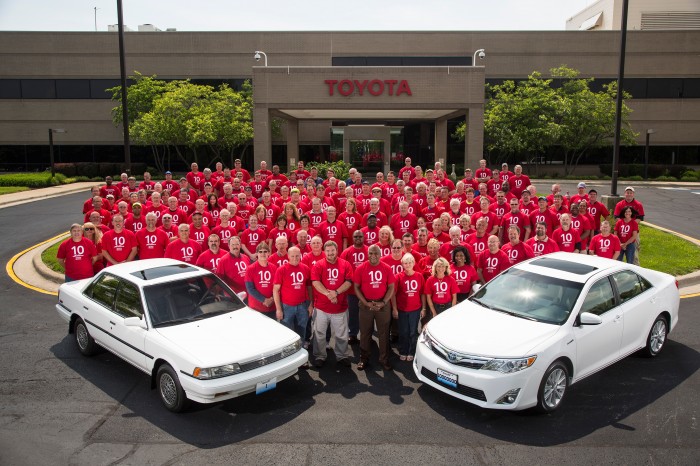 At the time the car was dedicated, Toyota Motor Manufacturing employed just 1,100 workers—90 percent of whom were located in Kentucky. This was a hint of what was to come, with the Georgetown plant becoming, and remaining, Toyota’s largest in North America. The plant began increasing production through 1988, and planned to be at full capacity of 400 cars per day by 1989.

To compare, the plant currently builds 500,000 cars per year, which averages out to around 1,370 per day, and will be adding an additional 50,000 vehicles to that annual capacity when production of the first-ever U.S.-built Lexus moves to the plant in late 2015.