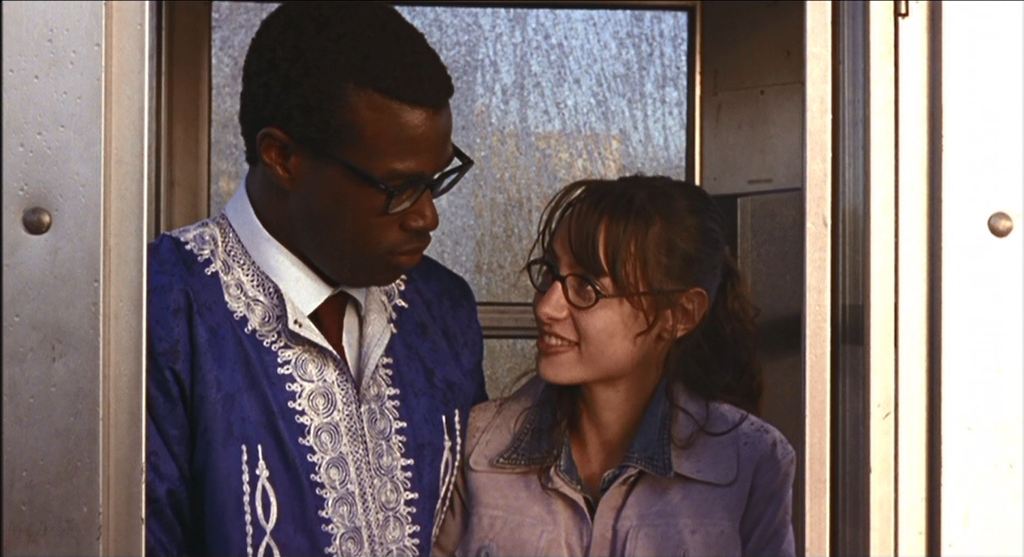 Main characters George and Alicia share a quiet moment in the midst of traffic within a phone booth.  Photo: IFC Films

One of our favorite aspects of our summer road trip film series (apart from getting to discuss cars) is discovering and drawing attention to lesser-known independent films, such as this smart and quirky independent feature from 2001. Writer/director Joel Hopkins made his feature length debut with this understated romantic comedy based on his successful 1998 short film “Jorge.”  Not only is Jump Tomorrow a thoughtful character-driven study on losing oneself in passion, but also an under-appreciated road trip adventure worth taking! 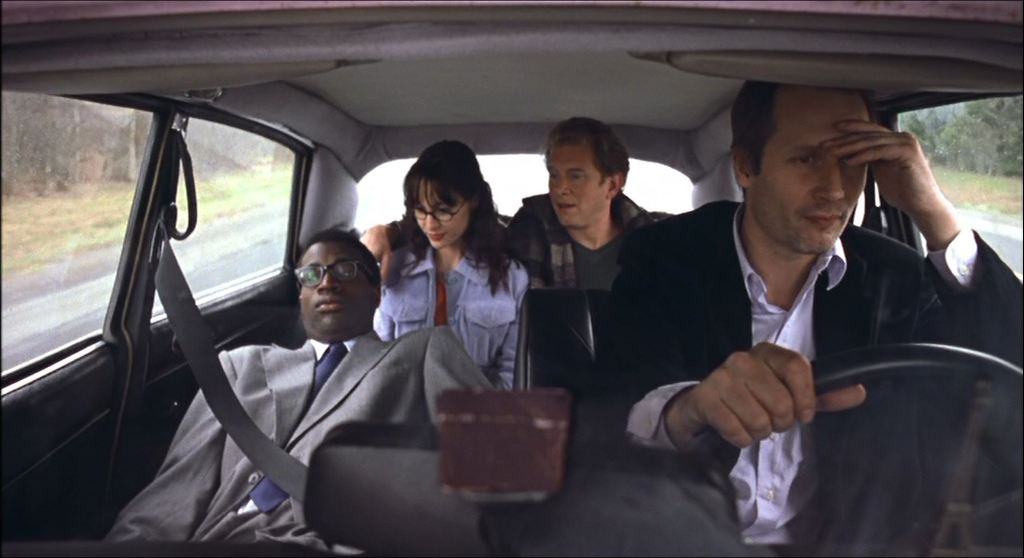 Our main characters find themselves in an uncomfortable situation: stuck together with their repressed feelings. IFC Films

Socially awkward office worker George (Tunde Adebimpe, musician in the Brooklyn-based band TV on the Radio) has trouble smiling. Despite his upcoming arranged marriage to his Nigerian childhood friend Sophie, George feels burdened by the expectations of his deceased parents and his native culture. It’s not until he meets Alicia (Natalia Verbeke), a feisty Spanish stranger who affectionately calls him Jorge, that feelings of passion threaten to shake George’s quiet existence.

George, refusing to acknowledge these impulses, is befriended by Gérard (Hippolyte Girardot), a volatile and passionate Frenchman determined to play matchmaker and convince the mild-mannered man to follow his heart. With three days until George’s wedding, the road trip to Niagara Falls begins. Is George travelling to Canada for his wedding, or to pursue Alicia there? 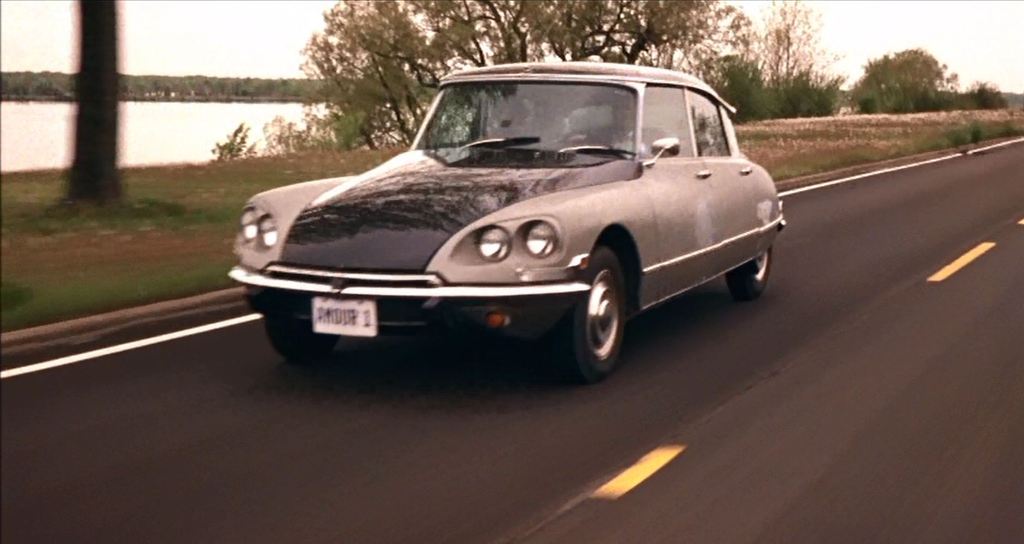 Gérard embodies the archetypal Frenchman (sans beret), a whirlwind of rapturous emotions who’s in love with the idea of love. Thus, the production crew hit the nail on the head with the choice of a spotless grey-and-black Citroën DS23 (released sometime between 1973 and 1975) as the vehicle of choice for the road trip. With an Eiffel Tower statue on the dashboard, French rap music thumping through the speakers, and the vanity license plate “Amour 1,” Gérard’s beloved Citroën DS23 is, literally, the vehicle for love.

George, who works in leisure travel planning but has never been anywhere, is only shown walking to and from places on his own. The car presents the opportunity for George to be faced with the feelings awakened in him which he tries to subdue. Entrenched in the language and culture of love, our hero eventually can no longer deny the impulse to give in and pursue Alicia. 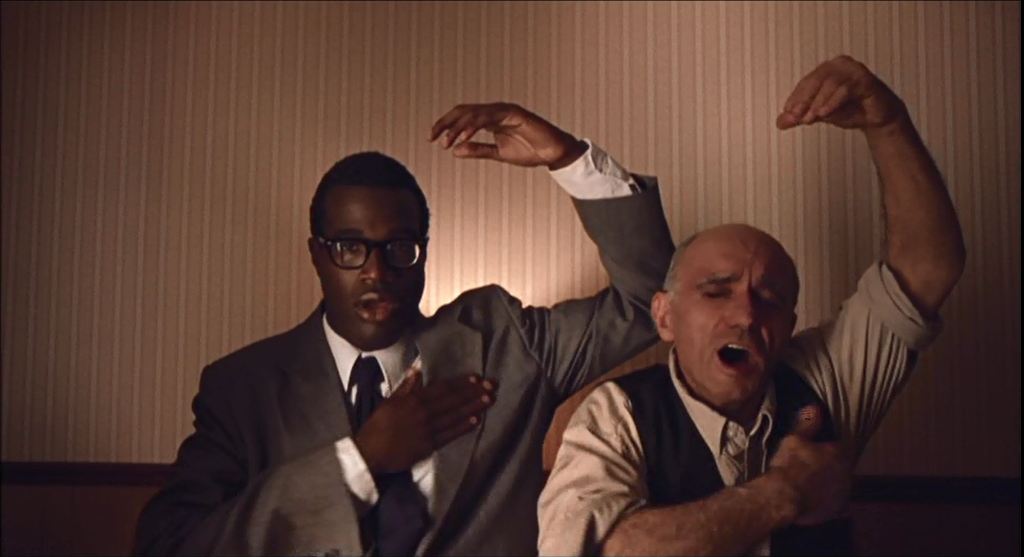 Being a first-time feature effort, Hopkins’ script is undoubtedly scattered but his direction is precise and competent. The most effective dynamic of the film is the relationship between George, the solemn and emotionless fiance, and Gérard, the excitable and impulsive Frenchman. Their conversations in the car concerning losing oneself in love and debating following one’s heart versus others’ expectations take time to build the characters.

And writer/director Hopkins’ approach is heavily character-driven, which which you can see again in his 2005 follow-up Last Chance Harvey. This approach is what sets Jump Tomorrow apart from the majority of road trip films out there. The focus isn’t on the events along the way but the introspective journey the protagonist endures.

The other aspect that stands out is the choice of music, visual style, and production pieces, which are all strongly reminiscent of a 1960s French comedy. The approach feels kitsch, and will divide viewers: either it’s too heavy handed and renders the approach dated, or it’s delightfully retro for its unusual perspective.

If our review strikes your fancy, we highly suggest checking out the trailer below and giving the film a watch. As Gérard reminds us, “Never underestimate the power of love.”