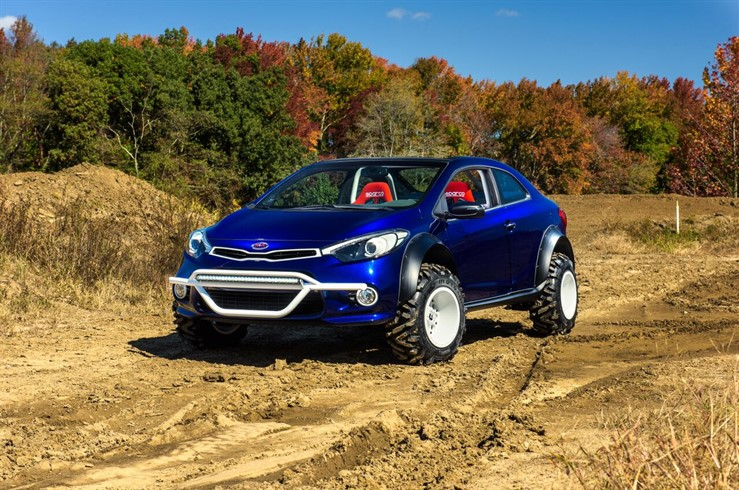 Kia has a list of six special edition models set for the SEMA Show later list year, each showcasing one of the six geographical regions in the United States. One of our favorites of the six, though, happens to be representing the American South.

Similar to the region it represents, the Forte Koup Mud Bogger isn’t exactly what it seems. Just as quickly as an old Southern woman will say “Bless your heart,” the Mud Bogger will blow your mind. Its custom design reflects the Southern love of getting a little mud on the tires with a generous four-inch body and suspension lift, along with 28-inch off-road tires.

The Forte Koup Mud Bogger puts a twist on the Shakespearean quote, “Though she be but little, she be fierce.”

Along with the suspension lift, this one-of-a-kind, tiny Forte Koup also had some modifcations to the fenders and side skirts to accommodate the massive tires it is equipped with. It also has custom riveted fender flares, adding a nice touch of ruggedness to the compact car’s exterior.

Get More Tech for Your Buck: Check out what the Kia UVO system has to offer

Another feature that deserves a lot of attention is the panoramic roof with a vinyl pushback top. Just like the South, the Kia Forte Koup Mud Bogger has some hidden surprises that are sure to keep things exciting.