April 30th was a both a good day and a bad day for Russian soccer player Andrey Yeshchanko.

Bad: He was driving it at 170 kph (105 mph) through Krasnodar’s city center and crashed headlong into a pole.

Good: He walked away with no injuries.

The 31-year-old, who played the left back position for the Russian team at the 2014 World Cup in Brazil, is currently on loan playing as a defender for Kuban Krasnodar. The crash was captured by a CCTV traffic camera, which showed the car smash into the concrete pole in a cloud of dust, throwing pieces of the car body in every direction. 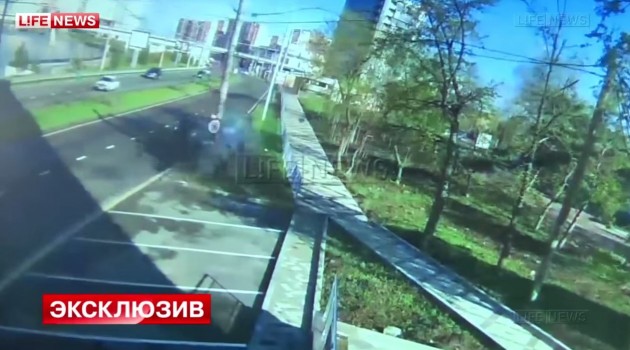 Hint: That cloud of dust is where the car is. Mostly.

When the dust cleared, the smashed remains of the car rested some distance down the road (and up the road, and across the road, and in the park next to the road). The pole, by the way, was also destroyed, and toppled into the road.

Then Yeshchanko got out of the car, presumably saying the Russian equivalent of “Holy crap, how am I not dead?”

Russia’s LifeNews reported that eyewitnesses said the footballer was driving drunk, but there has been no comment from Kuban Krasnodar (except, possibly, “Holy crap, how is he not dead?”).

You can watch the crash below. After the impact, watch for Yeschanko getting out of the car, unhurt. Also, in the last few seconds, watch for the bystander calmly walking up to the horrific crash site as if it happens all the time.