Does this round snow scraper's unique shape run circles around its competition? 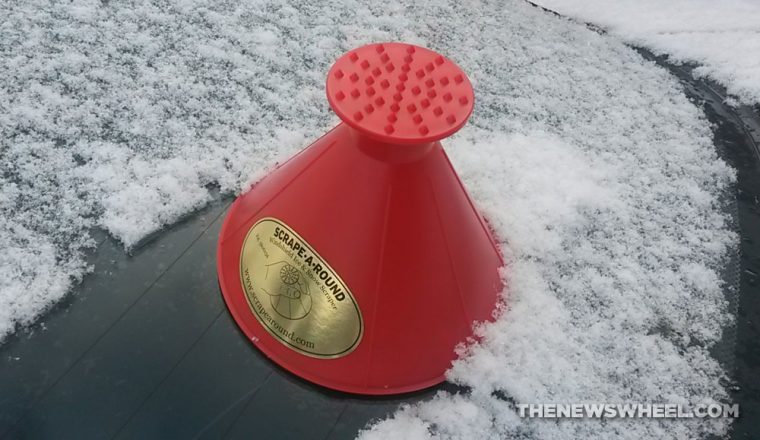 For years, we’ve  used the same plastic sticks to etch through layers of ice and snow that build up on our cars’ windshields overnight. I don’t know the reason ice scrapers were designed the way they were, and I don’t think most other people do either.

But, over the years, one person–an engineer, no doubt–was bound to question this tool’s simple design and try to improve upon it. Hence, we have the Scrape-A-Round.

This cone-shaped ice scraper was designed by Galen Merrell, a retired engineer in Utah. It’s been mostly sold online and advertised through word-of-mouth, but its promising claim to re-invent the snow scraper had us at The News Wheel intrigued. 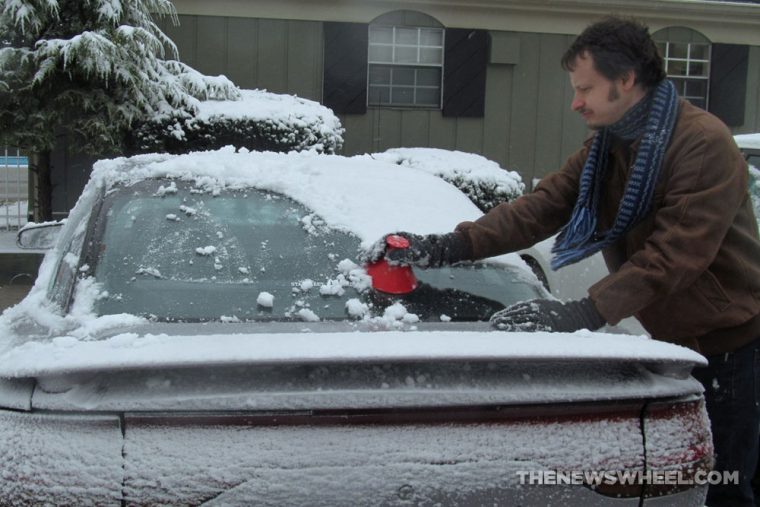 The Scrape-A-Round rethinks what an ice scraper should be, reinventing its design from the ground up. “Traditional scrapers are all based on the same ineffective concept,” explained creator Merrell. “We took an engineering approach, started with a clean slate, looked at the job we were trying to do, and designed from scratch.” The result is a flexible, cone-shaped unit that defies how we picture snow scrapers.

According to the research that went into designing the Scrape-A-Round, traditional flat ice scrapers don’t work because:

So, the Scrape-A-Round was designed to work forward and backward, is made of a flexible polypropylene plastic that evenly distributes pressure at a 50-degree angle, and only needs one hand for use. 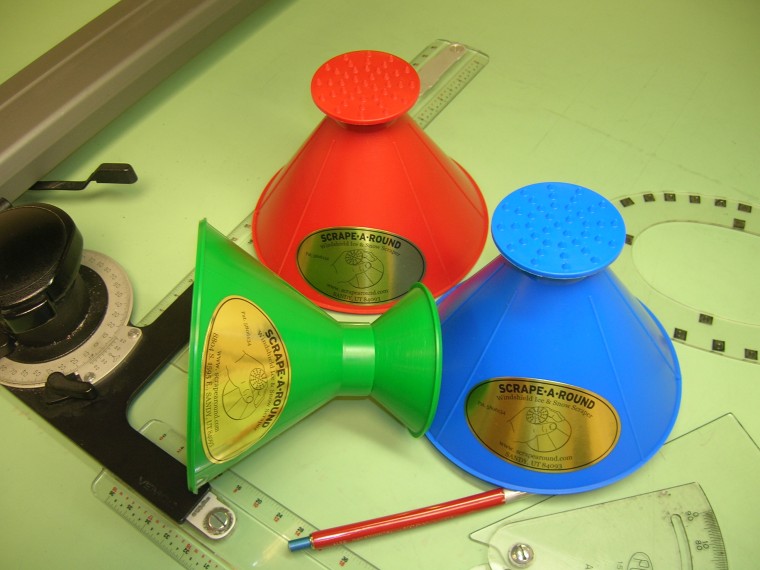 Scrape-A-Round units come in sets of three if purchased online: vibrant red, green, and blue colors of varying angles. Each cone-shaped unit comes with a studded ice breaker and is adorned with a golden product sticker. They’re made of soft plastic that forms to the contour of the window and doesn’t damage the rubber trim. The snow does stick to the plastic sometimes, but as long as you dust it off before throwing it in your trunk, that’s not a big deal.

The Scrape-A-Round is comfortable to hold as advertised and despite being pliable, it doesn’t feel like it’s going to 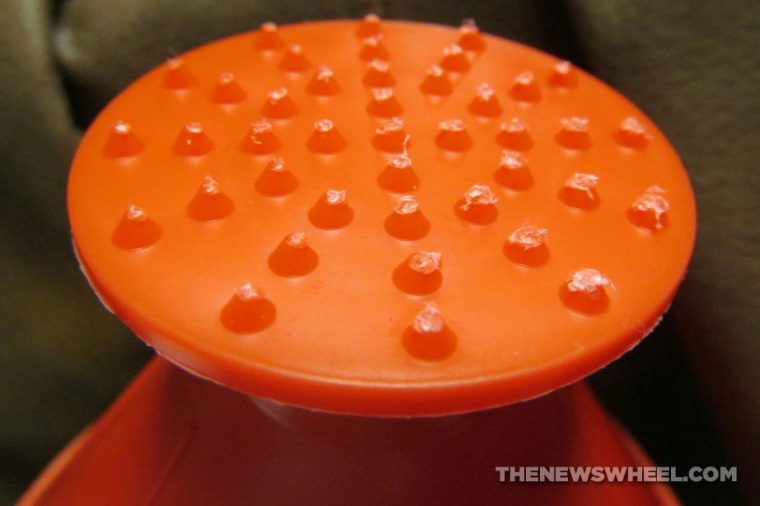 break when you use it. The shape of the tool is the perfect angle and is easy to use. Full commendation to the Scrape-A-Round designer’s innovation of rethinking the shape of an ice scraper so completely.

The only issue we encountered with the Scrape-A-Round’s manufacturing was that the studs on the ice breaker attachment wore down after a couple uses. Perhaps employing a harder plastic for this attachment would prevent that?

Great Items for Your Car: Check out these tough, all-season wiper blades 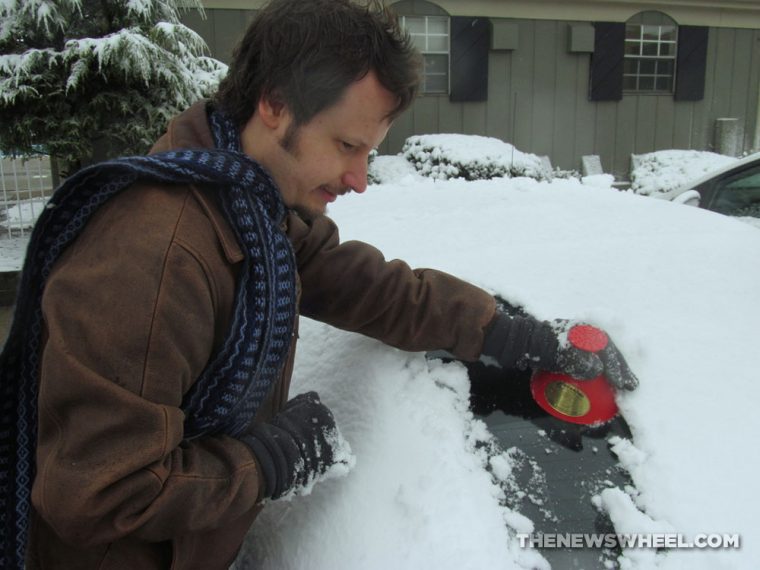 Using the Scrape-A-Round is simple. Turn the mouth of the funnel upside down against the glass, grip the neck of it like you’re holding a football, and press it into the accumulated snowfall. Use the 18″ scraping surface to clear off your car, scooping snow out of the way with the open mouth of the cone.

When you encounter icy patches, flip it over and use the sharp, studded top. And if you’re ever in need of a funnel to add liquids to your car, remove the top cap and voila!

Boost Your Car’s Engine: Read our review of a revolutionary fuel additive

Overall Assessment: Does It Do What It Advertises?

The round scraper performed fantastically in wetter precipitation, clearing a whole windshield with a couple wide swipes. The surface area cleared by the cone-shaped surface does make a substantial difference, as it claims. It’s gentle enough to work on mirrors and the body too.

The scraper did not work as ideally on a frosted windshield at frigid temperatures. While it did clear the upper snow layer, it took a lot of work with the ice-chipping side to make a dent in the hard ice. Unfortunately, that wore the spikes down after one use.

Based on these results, the Scrape-A-Round is a must-own for those dealing with wet, lake-effect, or coastal snow. 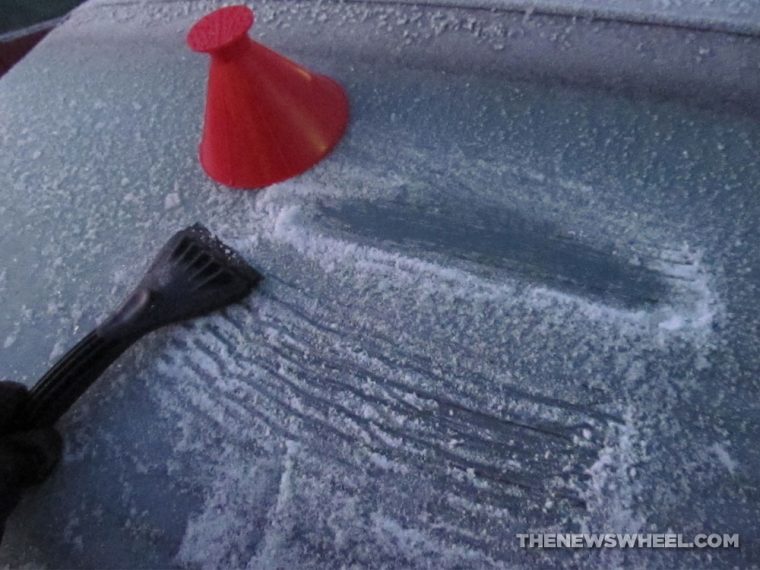 Holding the Scrape-A-Round feels natural, filling your palm without the need to tightly squeeze it. Though, it is challenging to get a solid grip when wearing  puffy gloves. I had trouble with the top popping off as my hands slid on the cone. It would be helpful if there were notches in the ice-chipper to keep it in place when attached.

The double-use of the Scrape-A-Round as a funnel is yet another clever innovation of this tool.

Evaluating the entire product, is it worth owning the Scrape-A-Round? Absolutely. It’s a brilliant redesign of a product that we’ve taken for granted for years which had fundamental design flaws. Will it replace your traditional ice scraper? No. There are some colder conditions in which the rigid edge of the flat scraper does better. Ideally, owning both of these items will keep you covered for either situation.

If you don’t own the Scrape-A-Round, you’re only half-ready for winter.