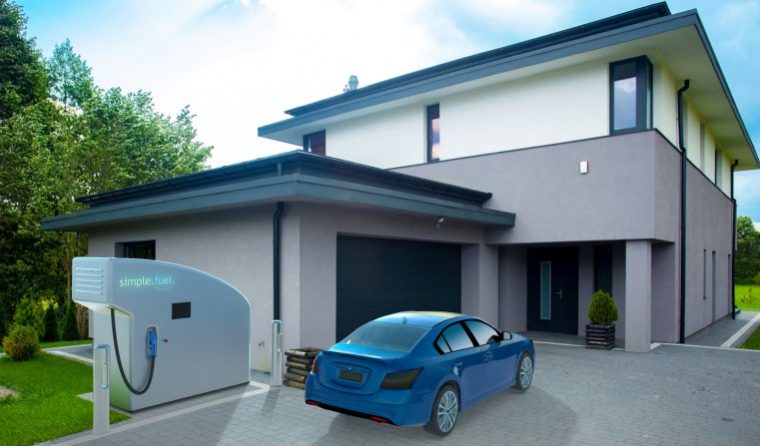 Last week, we briefly discussed how CO2 emissions involved in the production of hydrogen were one of the major obstacles in the way of hydrogen-powered fuel cell vehicles (FCV).

However, if we could find a way to produce zero-carbon hydrogen, there would be no reason hydrogen FCVs couldn’t replace electric cars as the automobiles of the future.

Thanks to a small group named SimpleFuel, we may already have a glimpse at what that looks like. The team was awarded a $1 million prize by the U.S. Department of Energy for building a hydrogen home-fueling station that emits nothing but oxygen.

The H2 Refuel H-Prize prize had been announced back in November 2014 to “challenge America’s innovators to deploy an on-site hydrogen generation system, using electricity or natural gas, to fuel hydrogen vehicles, that can be used in homes, community centers, small businesses, or similar locations.”

The station is an eight-foot tall box that uses a home’s electricity supply to electrolyze water, storing the hydrogen into a 5 kg carbon-fiber tank while venting the oxygen into the atmosphere. That makes it a zero-carbon method of producing hydrogen assuming the home’s electricity comes from a renewable generation source.

According to SimpleFuel, a 1 kg refill takes under 15 minutes (for comparison, a 2017 Toyota Mirai FCV holds 5 kg of fuel to go about 312 miles). That makes it slower than the refueling stations you can find around California, where a Mirai can complete a fill-up in under five minutes, but perfectly usable for home use where the vehicle can simply refuel overnight.

It’s early days yet to assess the widespread viability of such a station or how much it would cost to install, but it does show that producing hydrogen is possible without having to resort to pulling it out of methane.