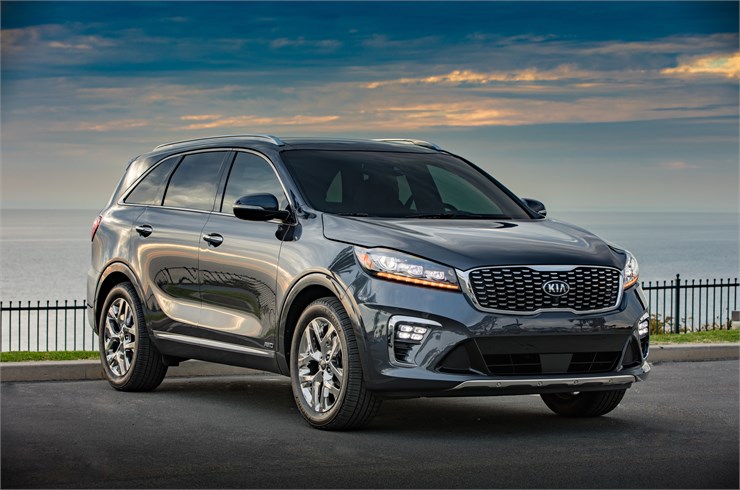 Although sporting new front and rear fascias, a distinct radiator grille complemented by a new headlamp design, restyled fog lamps and wheels at the Los Angeles Auto Show, the 2019 Kia Sorento’s appearance revealed what matters most is on the inside.

Notable interior changes to the 2019 Kia Sorento include the pairing of a 3.3-liter V6 engine with an available eight-speed automatic transmission, a redesigned six-speed gearbox, and advanced technology options such as Driver Attention Warning, QuantumLogic™ Surround Sound, and Lane Keep Assist.

All five trims of the crossover — L, LX, EX, SX, and SXL — will feature, as a standard feature, three-row seating to accommodate up to seven passengers with the Sorento’s versatile 40/20/40 second-row and 50/50 third-row folding seats.

“In the highly-competitive crossover category, the Sorento is a clear example of how world-class design and craftsmanship are executed,” said Orth Hedrick, vice president, product planning, KMA. “Our popular utility now ups its game even further with enhancements in styling, packaging and content, making it even more attractive to shoppers seeking a premium level three-row SUV.”

The graphics have been enhanced on the instrument cluster; the steering wheel is easier to grip; and the crossover presents drivers with available features such as a panoramic sunroof, dual-zone HVAC, nappa leather-trimmed upholstery, ventilated and heated front seats, 14-way power driver seat, heated rear seats, eight-way power passenger seats, and four-way headrest along with thigh extension on the driver’s seat.

The 2019 Sorento not only made room for more passengers standard, it also boasts more space for your gear – approximately 74 cubic feet.

“The 2019 Kia Sorento is loaded with technology, including an upgraded AVN 5.0 navigation system with Android Auto™ and Apple CarPlay™ offered with higher level trims. The base level L trim gets a standard seven-inch user interface, also equipped with Android Auto2 and Apple CarPlay.3  And to eliminate the need for a charging cord, there’s now an available wireless charging3 tray for compatible Android6 devices, as well as Apple iPhone 8 and iPhone X,” reports Kia.

Learn More: How to replace wiper blades on your car

You can choose between front- or all-wheel drive and two engines in the 2019 Sorento — the above-mentioned 3.3-liter V6 GDI engine that generates 290 horsepower or the 2.4-liter inline 4-GDI that generates 185 horsepower. A diesel engine option is also in the cards for the crossover, according to Kia.