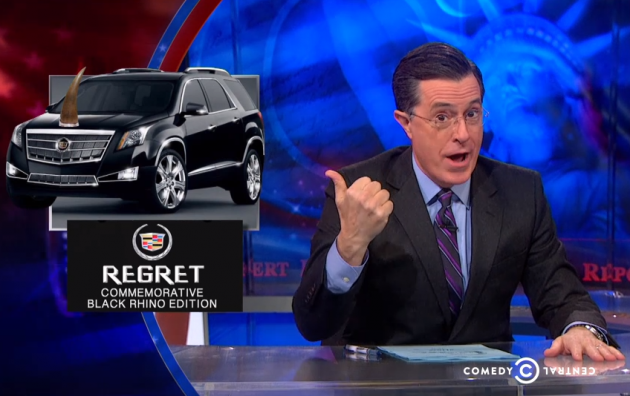 There are only two more episodes left of The Colbert Report (or, as it is now known, The ColbDewar’s Repewars, since Colbert just sold the series’ naming rights to Dewar’s Scotch), so savor videos like the one below – after Thursday night, there won’t be any new ones coming out.

On last night’s next-to-next-to-last installment of the satirical late-night program, host Stephen Colbert reported (repewarted?) on the recent fall in gas prices and the corresponding rise in SUV sales. In typically gung-ho fashion, he predicted that gas prices would stay low forever, and encouraged members of Colbert Nation to spend big on gas-guzzlers, including an interesting concept dreamed up by his writers: the Cadillac Regret, which is apparently available in a “Commemorative Black Rhino” trim.

Sure, that giant rhino horn that Caddy put on the Regret’s hood isn’t very aerodynamic, but who needs a fuel-efficient design when gas can be had for less than two bucks? Check out the whole segment for yourself:

Jason Bordoff, from the Center on Global Energy Policy, stopped by the show to explain that the fun will eventually end, as oil prices always fluctuate. So while the competitive “Oil War” between OPEC and the US fracking industry has led to some crazy cheap  gasoline, buying more fuel efficient green vehicles is still the best plan for the long-term.