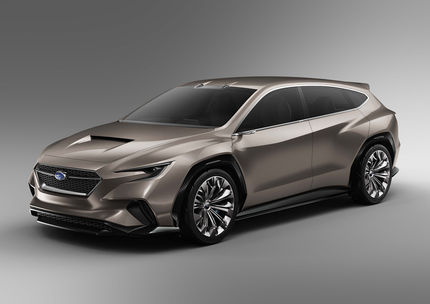 The newest VIZIV Concept features the automaker’s dedication to increasing the joy of driving as well as engineering their vehicles with the most advanced safety technologies. It follows the blueprint of Subaru’s signature touring wagons, exemplifying Subaru’s “Dynamic x Solid” design beliefs. The VIZIV Tourer Concept boasts a hexagonal grille, four chiseled fenders, and a spacious body. Inside, the concept delivers seating for four and ample cargo space.

“The VIZIV Tourer Concept is filled with a crossover mix of values to enhance active lifestyles, expressing the enjoyment and peace of mind that Subaru delivers to its customers,” reports Subaru.

“Designed with a tourer theme, the Subaru VIZIV Tourer Concept unites a Symmetrical AWD layout powered by a boxer engine, with Subaru’s wealth of expertise in offering driving performance, practicality and safety; delivering a new value in a tourer form, enabling drivers and passengers to fully savor the enjoyment of travelling by car,” explains Subaru.

“We’ve already seen Subaru’s vision of the next WRX sedan in the form of the VIZIV Performance concept, and as the name suggests, the VIZIV Performance STI concept previewed the WRX STI. But when Subaru redesigned the WRX for the 2015 model year, it dropped the five-door version from the lineup,” reports Woodard. “Though previous generations received a wagon body style, the last liftgate-equipped WRX was more of a hatchback variant. The VIZIV Tourer concept is the first hint we’ve gotten that the WRX wagon might make a comeback.”

The first Subaru VIZIV Concept was introduced to the world in 2013.