Today, at the conclusion of Kia’s press conference at the 2014 Chicago Auto Show, the automaker at last revealed the next step in their EV evolution: the 2015 Kia Soul EV. Want to know what you’re getting: it’s like a Kia Soul, except it’s an EV. 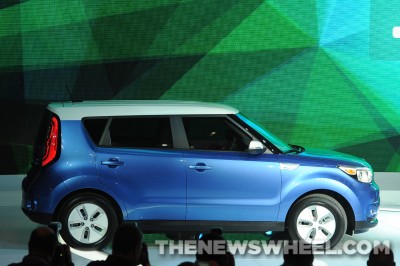 Sure, it looks pretty much the same as the hamster-like vehicle that we’ve all come to know and acknowledge (I’m sure some people love the Soul, but everyone goes through a dark time in their life where every day is a fashion faux pas, after all), but what’s most important here is what lies beneath the floor: the 2015 Kia Soul uses a 27kWh, 200 watt-hour/kg lithium-ion polymer battery that is expected to allow for a driving range that falls somewhere between 80 and 100 miles. According to Kia’s press release, the Soul EV has even exceeded 100 miles in some tests.

Beneath the hood, you can find an 81.4 kW, 109 horsepower electric motor that will run quiet and give the Soul EV a top speed of around 90 miles per hour.  The 2015 Kia Soul EV will also feature UVO EV Services, which will bring Kia’s telematics and infotainment system, and Organic Light Emitting Diode (OLED), which will display information on the vehicle’s energy flow, charging time, ECO driving level and energy economy on an efficient 3.5” touchscreen display.

While the 2015 Kia Soul EV and the newly-revealed Optima Hybrid seemed to go for a more straightforward look, it can be assumed that this is because Kia was saving all of its crazy (and I mean crazy in a good way) for the Niro Concept, which also debuted at CAS on Thursday.

Stay tuned for more from Kia’s press conference, as well as more images of the 2015 Kia Soul EV, as our coverage of the 2014 CAS continues at The News Wheel throughout the week.