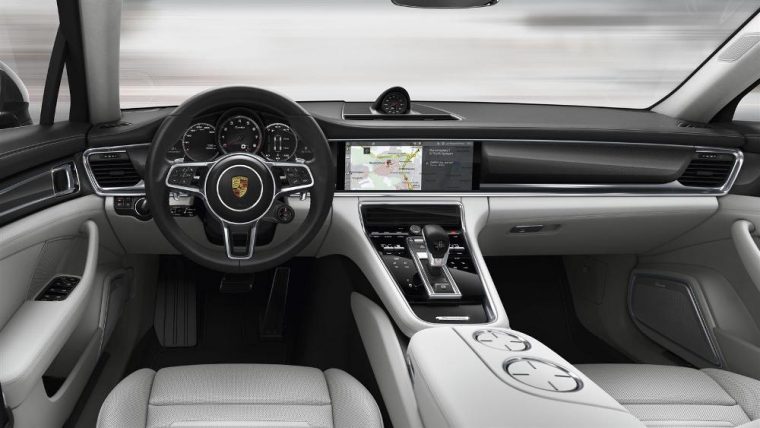 The 2017 Porsche Panamera’s new infotainment system is controlled via a 12.3-inch touchscreen

When Porsche sent out its official press release announcing the new second-generation Panamera sedan, much of the focus was directed toward the car’s new attractive exterior design and powerful engine options, but the interior tech has also been updated and Porsche has revealed more details regarding the Panamera’s new Porsche Communication Management (PCM) infotainment system.

For starters, most of the physical buttons and conventional instruments typically found inside the Panamera have been replaced with touch sensitive surfaces. In addition, there will be a total of three displays used in the cockpit to assist the driver. Directly in front of the driver’s eyes will be two 7-inch displays, while a 12.3-inch touchscreen that works similar to the interface of a smartphone will serve as the centerpiece for the new infotainment system.

The updated PCM will come with advanced features such as new voice control technology, Apple CarPlay smartphone integration, and a new system called Porsche Connect. The latter will offer services like call center support, a Wi-Fi hotspot, navigation with traffic updates, and remote access to the vehicle via an Apple Watch or smartphone.

Porsche will offer three packages that will provide many of these services at no cost for a limited amount of time. Those three packages are Navigation and Infotainment, Car Connect, and Connect App. The Navigation and Infotainment package will provide users with access to Google Earth and Google Street View to help them with their daily commute, while the Connect App will give Porsche owners the ability to find their car in a crowded parking lot or they can use it to simply check their Porsche’s fuel mileage by using just a smartphone or an Apple watch.

It should be noted that the startup screen for the new PCM infotainment system is fully customizable and users can also select their own widgets for functions they use most often.

Other notable tech features that come standard with the 2017 Panamera include 10 GB of media storage for MP3 files, a CD/DVD player, two USB ports, and two SD card slots. In addition, the 2017 Panamera is also available with the Night Vision Assistance system, which uses a thermal imaging camera in order to detect if there are any people or large animals in front of the vehicle.

With all of the new tech features that come with the second-gen Panamera, purists should be pleased to find out the tachometer will remain an analog instrument and will be situated between the two 7-inch display screens.

The 2017 Porsche Panamera is scheduled to go on sale later this year in the United States.