The Rock Buys His Uncle, The Baddest Wrestler Who Ever Lived, a Suitably Bad Ford F-150 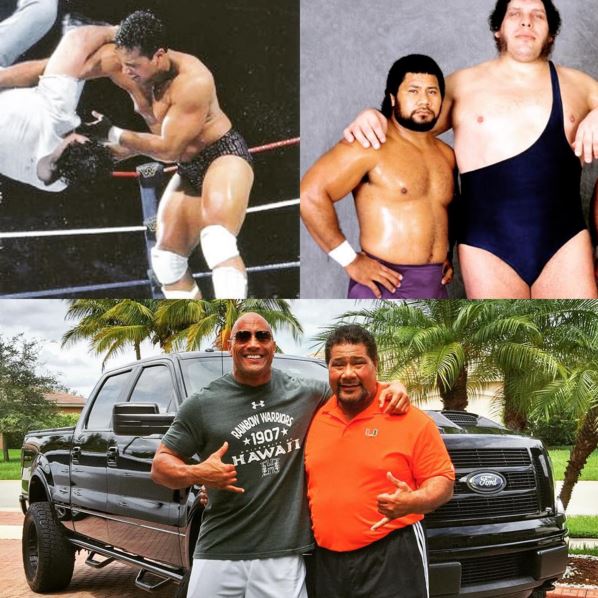 Ford recently acquired the services of Dwayne “The Rock” Johnson as spokesman for its vehicle services and specialists. The Rock was chosen not for his impressive in-ring achievements—Ford actually went out of its way to ignore the fact that Johnson originally earned his fame as a professional wrestler—but because he is a longtime Ford truck owner. In the spirit of Christmas, The Rock opted to spread the love to another former wrestler—his “Uncle Tonga”—and share a heartwarming story with his fans about a time where he had nothing but the generosity of family.

Merry Christmas Uncle Tonga – enjoy your new truck! Cool Christmas story to share with y’all… Known my “Uncle Tonga” since I was 5yrs old. My grandfather, High Chief Peter Maivia helped train him to become a professional wrestler in the 70’s. Throughout Tonga’s illustrious wrestling career he changed his name to “King Haku” and became one the WWE’s most sought after “bad guys” and still known to this day for being one of the toughest and legit most vicious man in wrestling history. Years later and I get a call from WWE saying “Vince McMahon wants to see you wrestle immediately. He’s flying you to RAW tomorrow and you’ll have a tryout match.” I thought holy shit that’s awesome, buuuut there’s a few problems: For me, I wasn’t just having “a tryout match”, because I had never actually HAD a real match in my life. Ever. WWE thought that I already had multiple matches under my belt, but little did they know. What they also didn’t know was that I was broke as hell and didn’t actually own wrestling gear – no boots, knee pads or most importantly.. wrestling trunks. I went to Sports Authority and bought some bright ass white volleyball knee pads, called my Uncle and asked if he had ANY trunks I could use for my tryout. He said all I have is a pair of shiny purple trunks (purple was his signature color), I told him I don’t care if the trunks are all the colors of Skittles, I’ll happily wear them. When I picked the trunks up from him I’ll never forget the monster hug he gave me, look me in the eyes and said, “I’m so proud of you. Go get ’em nephew!” Here’s the picture of me wrestling my FIRST MATCH EVER in Corpus Christi, TX in front of 15,000 people – proudly in my lucky purple trunks. And the rest… was history. My Uncle Tonga is a family man, humble man and champion. Most importantly one of the greatest human beings I know. So we walk outside and I said “Uncle how do you like my truck?” He said, “Whoooaaa nephew it’s beautiful… I love it!” I said “Good ’cause it’s yours.” He was speechless. Thru tears (manly of course;) we monster hugged ’cause I’ll never forget what he did for me when I had nothing. Merry Christmas Uncle and ofa atu. #LuckyPurpleTrunks

The man pictured with The Rock is Tonga ‘Uli’uli Fifita, better known to wrestling fans as Haku, King Haku, Prince Tonga, King Tonga, or Meng. Fifita is arguably best known among wrestling fans not for his actual in-ring prowess (which was substantial in and of itself), but for his toughness beyond the ring. Legend has it that Tonga’s extracurricular fighting resulted in at least one gouged-out eyeball and one bitten-off nose. If one were to ask many former and current professional wrestlers who they believed was the toughest man they had ever met, many would likely identify the man once known as Meng.

You know how your family has a crazy uncle who doesn’t know when to not say offensive stuff at dinner? Imagine instead having an uncle who, despite being awesome, also has a history of maybe possibly biting off noses and gouging out eyeballs. If you had an uncle like that, of course you would buy him a new truck.

The picture painted in The Rock’s story depicts Fifita as a warm and kind family man who helped him at a time where he had nothing. As a result, The Rock bought his uncle a customized, blacked-out F-150. According to The Rock, they both cried “manly” tears and shared a hug of monstrous proportions. No eyeballs or noses were lost in the process.

Here’s hoping that Rock also pulled some strings to get Meng a gig in a future Ford F-150 commercial, preferably one wherein he and The Barbarian beat a competitor truck into a twisted, flaming wreck while Kevin Sullivan cackles maniacally in the background. That would be advertising at its finest.