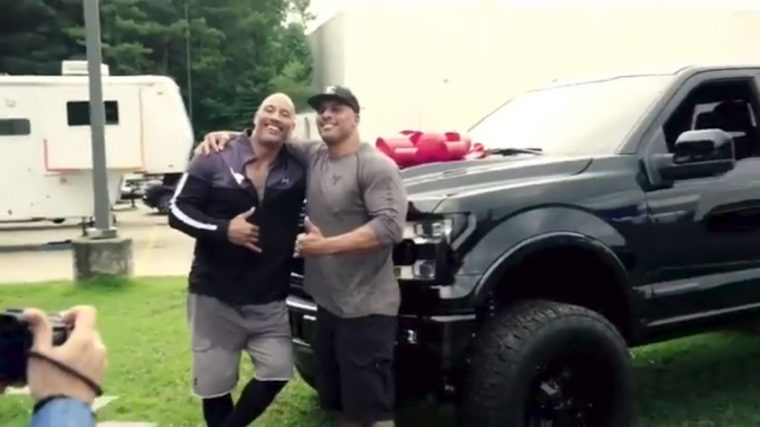 As it turns out, the biggest muscle on Dwayne “The Rock” Johnson is not his biceps, triceps, lats, traps, quads, delts, pecs, calves. It’s his heart. But all those other muscles are huge as well, obviously.

This massive, massive mountain of a man shared a video with his millions … and millions of Instagram followers that demonstrates his equally enormous capacity for compassion. The video, which you’ll find below, shows The Rock surprising his stunt double and cousin Tanoai Reed with a brand-new Ford F-150.

The Most Electrifying Truck in Truck-Entertruckment: 2018 Ford F-150 offers exceptional performance and more than a little curb appeal

SURPRISE! I love handing over keys?? I love you brother and enjoy your new truck! Over the course of my career, my stunt double (and cousin) Tanoai Reed @samoanstuntman has broken multiple bones, severed tendons, torn ligaments & just been an overall dominating bad ass achieving several “Stuntman of the Year” honors. All done with one goal in mind – deliver the best movie possible to the world. I had this custom pick up truck delivered just in time to surprise him (he’s still recovering from a stunt injury) while we give what he thought was going to be an interview about our careers together. As you’ll see the moment I put my hands on my hips, that’s the drivers cue to pull away and reveal the big surprise. Not only does Tanoai represent our family and my career with relentless commitment and passion. He also represents an entire Hollywood stunt community that is truly the backbone of our business. Love you uso and thank you for the blood, sweat, tears and years. We’re just getting started. Enjoy your new truck! #LetsRoll ??

Unbelievably, the side-by-side comparison suggests that Reed might even have just a bit of size on his cousin. Both titanic dudes are dwarfed by the F-150, which looks very much like The Rock’s own prized pickup. Still, it seems like there’s a decent chance that Reed and The Rock could tag-team squat the truck for reps. I mean, just look at these guys. Their hug alone has enough power to obliterate half of the galaxy.

The Rock’s made quite the habit of doling out trucks to his family. In 2015, he bought a similarly rad-looking F-150 for his uncle Tonga ‘Uli’uli Fifita, who you may know as professional wrestler Haku and allegedly one of the baddest men to ever walk the planet.

Some awesome photos that brother @hhgarcia41 took of this amazing and beautiful surprise. Thank you for capturing this ?? #blessedbeyondbelief