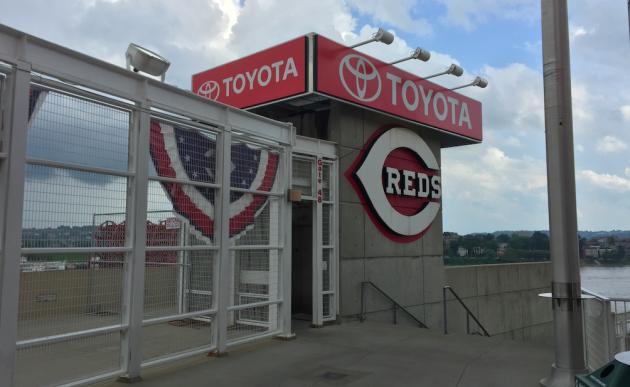 The Cincinnati Reds have added a lot of new stuff to Great American Ball Park for the 2015 All-Star Game—a brand new video board in the right field bleachers, free WiFi internet, a whole bunch of American flag banners, etc… But there’s one thing that’s been subtracted amid all of the additions to the stadium: the Toyota Tundra pickup truck.

For the uninitiated: since 2008, the Reds have put a brand new Toyota Tundra on a platform in very deep left-center. If a Reds player hits a home run and the ball hits a sign in the centerfield seats (or the truck itself), a fan will win the brand new truck.

After seven and a half seasons, that has never happened. 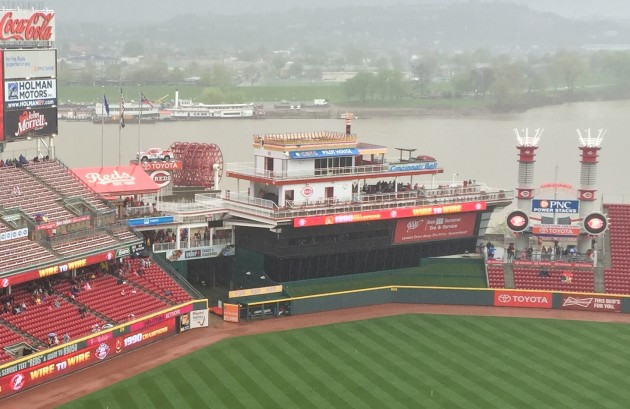 A Reds player’s home run would need to hit either the sign between the power stacks, or the truck itself

According to the Cincinnati Enquirer,  a ball would need to travel 430 feet in a straight line from home plate to hit the sign, and 502 feet to dent the truck itself. So it would take a monster dinger, and in exactly the right spot.

So far, no Reds player (or fan) has been lucky enough to manage the feat, but tonight’s Home Run Derby will give the likes of Prince Fielder, Albert Pujols, and hometown hero Todd Frazier multiple shots at hitting that sign. Unfortunately, there’s no truck to be won (or hit).

So why is the pickup gone? Probably because Chevrolet is the official automotive sponsor of Major League Baseball, as well the All-Star Game, and the automaker probably isn’t too crazy about the idea of a competitor’s vehicle being displayed so prominently during the game.

It’s a shame, though, that they apparently haven’t chosen to at least replace it with a Silverado. Or perhaps the new 2016 Camaro, which will almost certainly be given to the game’s MVP on Tuesday night, and which is supposed to be part of the festivities.

But there’s still time: Chevrolet, please put a Camaro on top of that empty platform so that we can see if Todd Frazier can smash its windows.