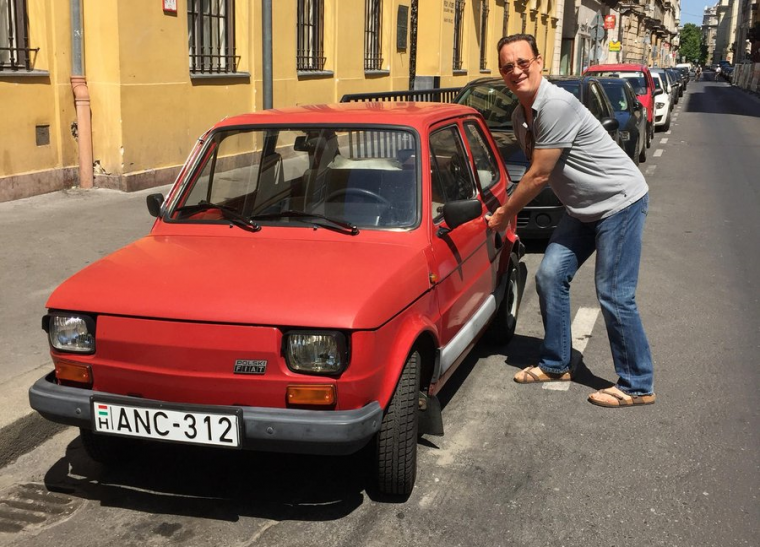 If you follow Tom Hanks on Twitter, then you know that he posts some of the most random and puzzling tweets. He is the epitome of an out-of-touch dad using the site and we can’t help but love him for it. While posting pictures of lost gloves and ID cards, Mr. Hanks has been known to delight many with his musings.

As of late, the Oscar-winning actor has taken to posing with a variety of vehicles with captions similar to, “I’m so excited about my new car!” But these aren’t just any cars that he’s posing with – they’re all Fiat vehicles that have Tom all wound up. The first instance of these strange Fiat posts was back in August of 2015, where Mr. Hanks was only just, “Thinking of buying a new car.” That car in question was a classic Fiat 500, fondly known as the Cinquino in Italy. (From the styling it looks to be an early 60s model.)

It wasn’t until October of this year that we were given another confusing collection of tweets from the Forrest Gump actor. On October 29th, Mr. Hanks posted two pictures with Fiats. One appeared to be another 500, while the other looks like a red Polski Fiat 126p, which was created in the early 70s.

I got a new car! Hanx pic.twitter.com/4mZ7hhbW9F

So excited about my new car! Hanx pic.twitter.com/e5es8RoR1s

Just three days later, we were given a shot of Hanks with another 126p, this time while sporting some awesome dad sandals on a sunny day in what appears to be Europe.

I got a new car! Hanx pic.twitter.com/kzij8QEIyo

The most recent post in this strange collection was on November 18th and features Tom with a pale yellow Fiat 126p (yet again).

I’m so excited about my new car!! Hanx. pic.twitter.com/rNelj4qj9v

We’re not sure why Hanks keeps posting these random Fiat photos, but the oddities aren’t just seen on Twitter. Back in March of 2015, before any of these tweets, Tom starred in Carly Rae Jepsen’s “I Really Like You” music video which conveniently featured a bright yellow Fiat 500X product placement.

Mr. Hanks may simply have an affinity for Fiat vehicles or he might have some sort of partnership with the Italian automaker. Either way, he’s still more entertaining on the internet than the potato that became famous because of One Direction.

Gallery: Check Out All of Tom Hanks’ Favorite Fiats