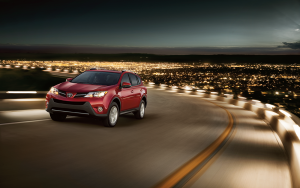 The 2013 model year marked the fourth generation for the RAV4, so Toyota did not need to redesign the exterior in 2014.  Instead the Japanese automaker looked toward the interior to make its enhancements, and we are now learning of the updates for the 2014 Toyota RAV4.

The refreshed 2014 Toyota RAV4 will now offer the Entune Audio system on every trim level.  The innovative Entune system is able to deliver your favorite apps through the Entune®App Suite, including Bing, iHeartRadio, Pandora, MoveTickets.com and a ton more.  Entune also deliver the convenience of Bluetooth wireless connectivity and navigation.

New standard equipment has updated for the 2014 Toyota RAV4, including power mirrors, locks and windows, and cruise control, backup camera and an impressive 6.1-inch touchscreen display.

According to Toyota’s press release, the 2014 RAV4 “is carefully tailored to the needs of the compact crossover SUV market it launched more than 15 years ago. The latest model combines a fuel-efficient four-cylinder engine, a standard six-speed automatic transmission, two-row seating for five and exceptional in-cabin technologies.”

Do you think the updates made to the 2014 Toyota RAV4 are enough to keep it atop its class?