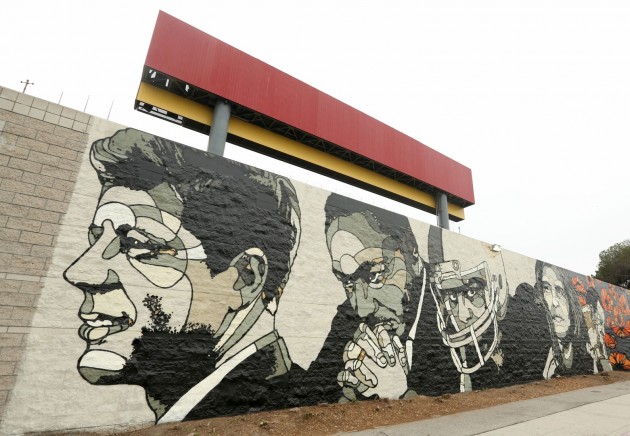 The first mural, “World Stage Legacy,” was created by artist David Flores, and prominently features iconic figures that have ties either to the Games or to the venue. These figures include Special Olympics athlete Ramon Hooper, and founder Eunice Kennedy Shriver. The mural is located at the LA Memorial Coliseum. The second mural is called “The Greatest,” and is by artist Cryptik. It’s located near the LA Convention Center, on S. Figueroa Street. Finally, the third mural, “Monument to the Special Olympics,” is by Kent Twitchell and is located on South Hope Street.

“Monument to the Special Olympics” by Kent Twitchell

The three murals were made possible thanks to a new working relationship between Toyota and the Mural Conservancy of Los Angeles. They were gifted to the city at a special ceremony on July 7th that featured representatives from Toyota, Special Olympics athletes, artists, and city leaders.

The 2015 Special Olympics run from July 25th until August 2nd, and will be broadcast across ESPN networks in English and Spanish. In the meantime, watch this video showing the making of David Flores’ mural.