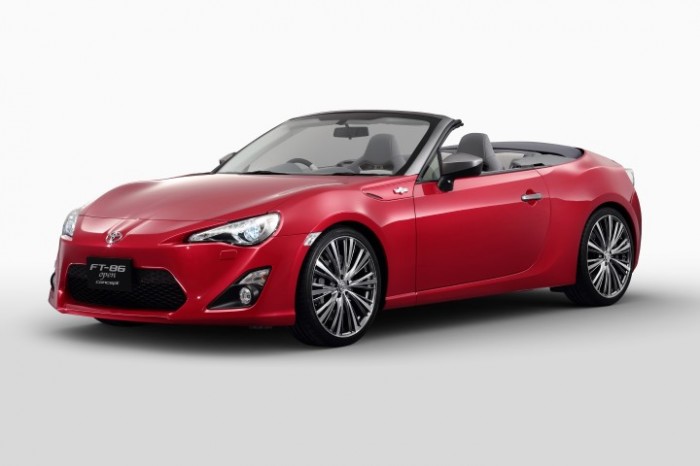 Back in November, we reported that Toyota would produce a GT86 CS-R3 rally car, based on the Scion FRS platform. Now, we’re excited to share information on plans for a convertible model and two turbo sedans based on the same platform that has seen so much popularity for the Scion brand. The Toyota GT86 lineup is about to become a family, and we are looking forward to getting to know each member of this sporty clan in more detail over the coming months.

The Scion FRS, otherwise known as the Toyota 86 Coupe in overseas markets such as Australia, was born from a collaboration between Asian motoring giants Toyota and Subaru. From this collaboration, the FRS and its twin, the Subaru BRZ, were unveiled. Both models are currently sold in the U.S. as coupes only. This could all change soon, however, according to Australian auto website motoring.com.au.

The Toyota GT86 lineup is rumored to be expanding to include a convertible, and two sedan models with different engines. The first sedan’s engine will be a version of Subaru’s Direct Injection Turbo (DIT) boxer engine, and the second will be a hybrid unit provided by Toyota to match the power of Subaru’s DIT engine. The boxer engine is expected to be mated to an eight-speed automatic transmission, similar to that seen in Subaru’s WRX STI rally superstar. Both sedan versions are rumored to be available beginning in 2016.

Unlike the two Toyota GT86 sedan models, the convertible version will require much less of a redesign, since it will keep the same frame and body as the original. This means that the convertible GT86 could be available as early as this fall. Supposedly, it will be equipped with a power-folding softtop which will fold down in a super-quick 20 seconds.

It’s unclear whether or not the Toyota GT86 lineup will replace the Scion FRS in the U.S. market. Be on the lookout for more on this as and when we hear it from Toyota itself.