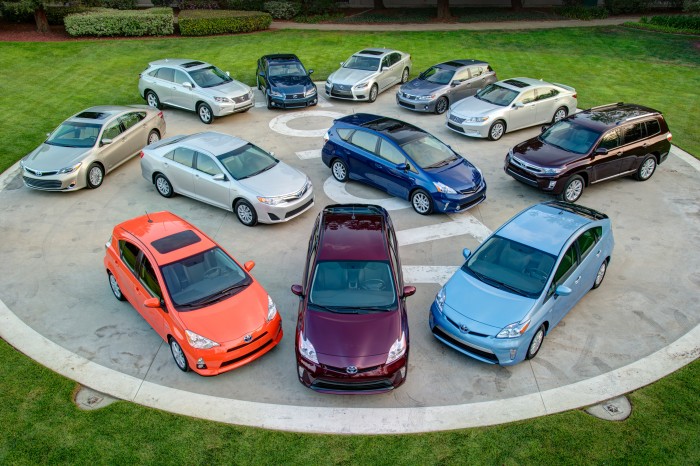 Toyota announced last week that it has eclipsed 6 million global hybrid sales as of the end of 2013.  The automaker states that as of New Year’s Eve, it has sold 6.072 million hybrid vehicles across the world, meaning that only nine months have passed since it was announced that sales had topped five million.

According to Toyota’s calculations, their hybrid vehicles—including Toyota and Lexus brand models—have led to about 41 million fewer tons of CO2 emissions in the atmosphere compared to what have would been emitted by similarly-sized gasoline vehicles driven about the same total number of miles in that time.

Toyota’s press release states that the automaker currently sells 24 hybrid passenger cars and one plug-in hybrid across 80 countries and regions the world over.  It also states that Toyota intends to launch an astonishing 15 new models over the next two years, including the upcoming Highlander Hybrid.  6 million global hybrid sales is a long way from the mere 18,000 or so units that the Prius sold in its first year of sales after launching in 1997.  Since then, the Prius and its hybrid brethren have been favorites among drivers in Japan, North America, and Europe in particular.

In 2013, Toyota sold 1,279,400 hybrid vehicles around the world—including a record 358,100 in North America—solidifying the automaker as the world’s premier green auto manufacturer.  With 6 million global hybrid sales achieved so quickly, one can only wonder how long it will take for Toyota to hit the seven-million mark.  Stay tuned to The News Wheel to find out when they do!