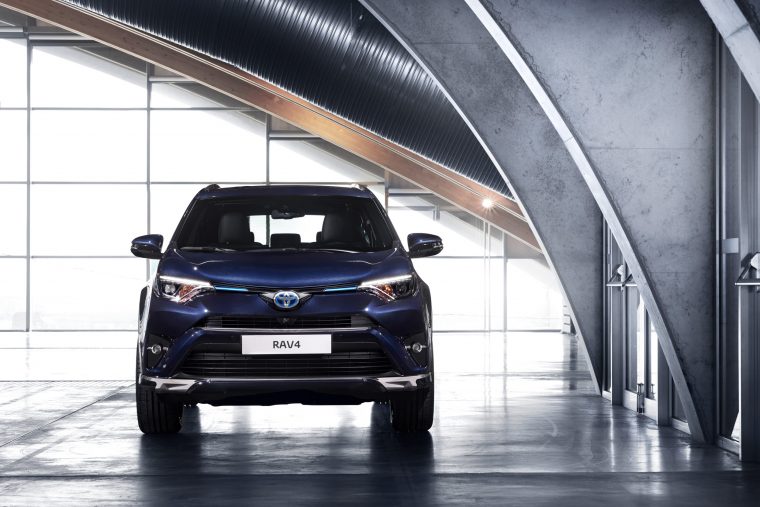 This year’s Geneva Motor Show marked a number of big European debuts for Toyota. Most notable was the global debut of the Toyota C-HR production model, which was slated to be a Scion model before the youthful brand was axed. Toyota also brought the new Hilux along for its European debut, along with the Proace Verso.

Another eye-catching model featured in Toyota’s display currently is the RAV4 Hybrid Sapphire model. While the Toyota RAV4 Hybrid Sapphire design study has been on display before, this marks its first appearance as a showcar. This means the model actually foreshadows some future developments for Toyota and the RAV4, at least in Europe. It is possible that this higher trim level could be implemented on the US RAV4 Hybrid above or below the Limited trim, however, pending reception at Geneva and during future appearances.

The RAV4 Hybrid Sapphire model is marked by a sapphire blue color—go figure. It also gets the blue treatment on the bumpers and side sills; the side sills are also embellished with chrome trim and a RAV4 Hybrid Blue badge. The chrome treatment extends to the roof rails and the grille, and the model sits on 20-inch wheels.

Inside the RAV4 Hybrid Sapphire showcar are leather upholstered seats with blue stitching and Hybrid Blue air vents. The interior is also marked by a console with Piano black inserts.

Toyota has indicated that though this is just a showcar and that the new RAV4 Hybrid is in its launch phase at this point, we can expect a full body color version to be added to the lineup in Europe. Leather seats are already currently an option, but Toyota is using Geneva to measure people’s reaction to other design elements.