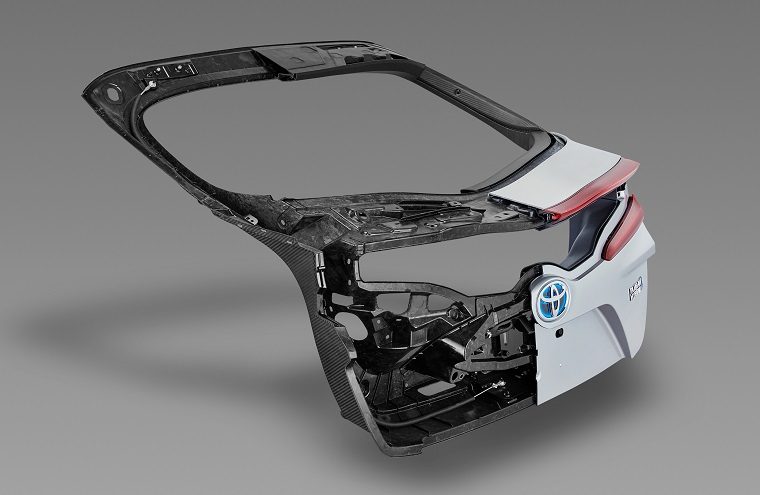 Toyota has received an Altair Enlighten Award at the CAR Management Briefing Seminars (MBS) for its “innovative weight reducing vehicle closure systems.” Put plainly, it was recognized for its use of carbon fiber reinforced plastic on the Prius Prime liftgate and Lexus LC 500 side doors and luggage hatch. The Altair Enlighten Award is the industry’s only award to acknowledge innovation in vehicle weight reduction.

These two applications marked Toyota’s first use of carbon fiber outside the domain of exotic vehicles. Had the company resorted to regular aluminum for the Prius Prime’s liftgate, it would have been 40% heavier. Had it used conventional steel structures for the Lexus LC’s side door and luggage hatch, they would have been 47% and 40% heavier, respectively.

Toyota chose to resort to carbon fiber for the two vehicles to help increase the Prius Prime’s battery range and liftgate usability. For the Lexus LC, the decision was primarily motivated by performance. As Toyota become more familiar with carbon fiber and as the associated costs gradually go down, it is likely that it will be used more frequently across the automaker’s range.

“We are excited to offer closure systems that are optimized to the unique mission of each vehicle,” said JP Flaharty, executive program manager at Toyota Motor North America Research & Development. “With CFRP applied to the Prius Prime liftgate and the Lexus LC side doors and luggage hatch, our customers recognize the light touch and high tech appearance of these sophisticated, lightweight door systems. Our entire development team is honored to receive this coveted award.”