Toyota Only Automaker Named in Top 50 Companies for Diversity 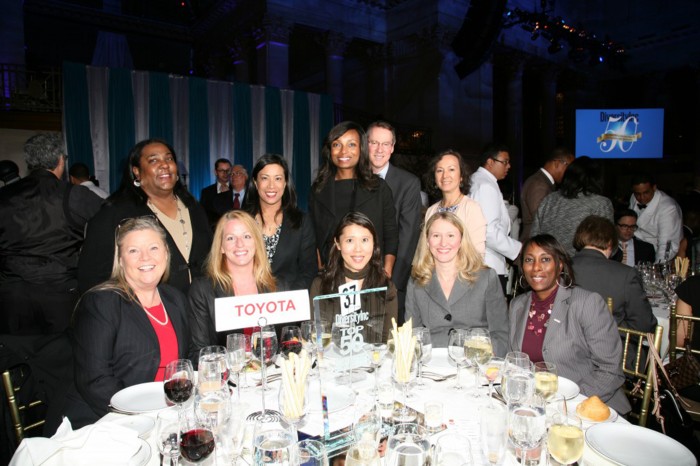 Diversity is the key to any successful business—a fact that Toyota is well aware of. As our culture becomes more of a melting pot with each passing day, business leaders recognize the importance of embracing diversity. At the 2014 DiversityInc Dinner earlier this month, DiversityInc honored Toyota as one of its Top 50 Companies for Diversity in 2014 thanks to numerous initiatives put in place by the Japanese automaker in recent years.

Toyota came in 38th out of 1,215 total companies, and was the only automaker to place in the top 50. Winners are chosen based on their performance in four primary areas: Supplier Diversity, Equitable Talent Development, Talent Pipeline, and CEO/Leadership Commitment. Toyota met all the criteria with ease, boasting a 99.99 percent diverse supplier retention rate and more than $100 billion in contracts with minority business enterprises, to name a few. Additionally, over 40 percent of Toyota philanthropy supports LGBT, ethnic, veterans, and disability organizations.

“We are honored to once again be included as a Top 50 Company for Diversity by DiversityInc,” commented Jim Lentz, Chief Executive Officer, Toyota North America. “There is a simple truth behind our approach to diversity and inclusion: If we want to build great cars and trucks for the way our customers live, Toyota will strive to be a reflection of the America in which we live.”

This is not the first time Toyota has been recognized by DiversityInc. In October 2013, the Japanese automaker was named the “Top Company for Employee Engagement” by the organization, as well as being recognized as a Top 10 Company for LGBT employees. Toyota also works closely with certified ethnic and women-owned suppliers as part of The Billion Dollar Roundtable.