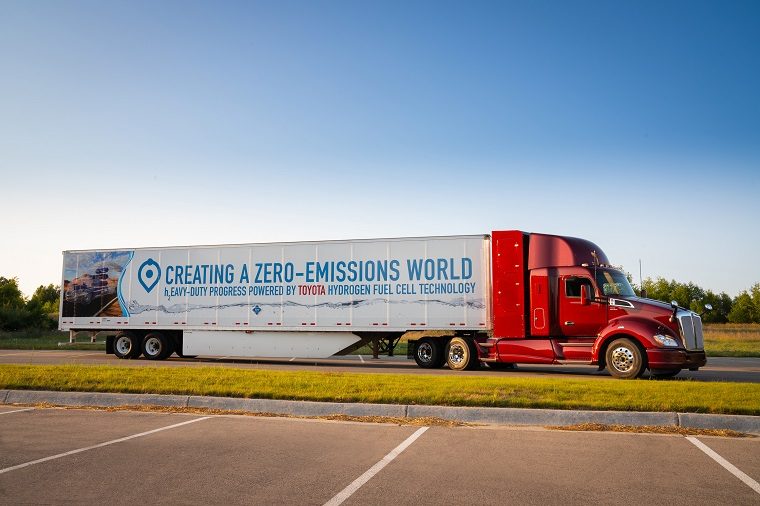 Toyota has launched Project Portal 2.0, the second iteration of its hydrogen fuel cell truck, which it unveiled today in Northern Michigan before a crowd during the Center for Automotive Research Management Briefing Seminars.

Internally known as “Beta,” the new electric Class 8 truck already boasts significant improvements over its predecessor, with an estimated range increased to more than 300 miles per fill, up from 200.

“The truck also enhances versatility and maneuverability with the addition of a sleeper cab and a unique fuel cabinet combination that further increases cab space without increasing wheelbase,” Toyota says.

The Project Portal “Alpha” truck has put in almost 10,000 miles of testing and real-world drayage operations since April 2017. The Beta truck will continue these operations in the fall in and around the Ports of Long Beach and Los Angeles.

The Beta truck is just as powerful as the Alpha truck: it produces 1325 pound-feet of torque and more than 670 horsepower derived from two fuel cell stacks, the same you would find in the Mirai FCV, which are fed by a 12 kWh battery. It has a weight capacity of 80,000 pounds.

That Toyota was able to maintain these figures while increasing the hydrogen fuel cell truck’s range by 50 percent is an extremely positive step forward, and an important one for semi-trucks, which are generally expected to cover very long distances.

“Our goal with the first truck was to see if it could be accomplished, and we did that,” said Craig Scott, senior manager for Toyota’s North American Electrified Vehicle & Technologies Office. “This time we’re looking at commercial viability. We want to help make a difference—a significant difference when it comes to the air quality not only in the LA area, but across the U.S. and around the globe.”