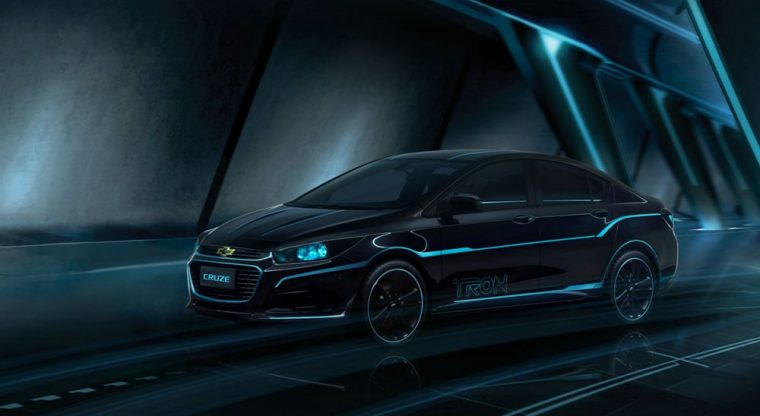 The 2016 Beijing Auto Show marked the debut of the Chevy Cruze show car that was inspired by the film Tron: Legacy
Photo: © General Motors

The 2016 Chevy Cruze compact sedan is already a big hit in the US, as the new model will yield up to 42 mpg on the highway and a hatchback version is scheduled to be released later this year, but it seems like the Chinese market has also taken a liking to this small Chevy.

Is General Motors Your Preferred Brand? Check out GM’s entire truck lineup for 2016

In anticipation of the new Shanghai Disney Resort that will be opening this June, Chevrolet teamed up with The Walt Disney Company China to produce a new Chevy Cruze show car, which was inspired by the 2011 Disney movie Tron: Legacy.

The new Tron: Legacy-inspired Cruze features eye-catching horizontal blue lines across its body that were designed to give this compact Chevy a more futuristic type of look. The striking blue lines were produced by using special metallic paint, but the exterior isn’t the only place these lines are included, as the cabin also features the bold blue lines on the seats, steering wheel, center console, and instrument cluster. For added style, the interior also makes use of ice blue ambient lighting, as well as a leather seats and dashboard, which comes with distinctive blue stitching.

The new Cruze concept car is meant to symbolize both companies’ strengths. For Disney that includes its futuristic thinking, while for Chevy the car represents its “Finding New Roads” slogan.

In China, the Cruze sedan is offered with two engine options. The standard motor is a 1.5-liter four-cylinder good for 112 horsepower and 107 lb-ft of torque, while a 1.4-liter turbo engine is also available that’s rated at 147 horsepower and 173 lb-ft or torque.

General Motors didn’t reveal whether the new Tron: Legacy-inspired Chevrolet Cruze will be coming to any future auto shows in the US.

Best Buys: Discover all the benefits of buying used GM cars and trucks