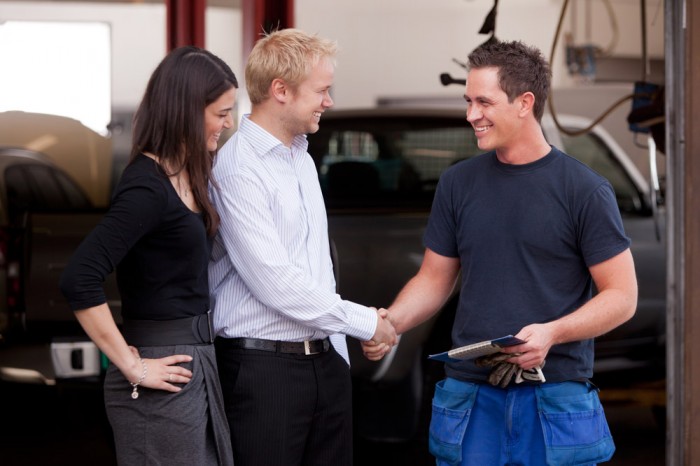 If you get your recall issues fixed quickly you can leave happy!

ATTENTION: If you own a car in these weird and wild times, there is a distinct possibility that your vehicle might be involved in a recall (particularly if your car was manufactured by a company whose name rhymes with Femoral Boaters). According to a report issued by Carfax, more than 3.5 million used vehicles that were listed for sale in 2013 had unfixed recall issues. Further, The Los Angeles Times reports that these unfixed recall issues can often be attributed to increased fire risk, among other problems.

“Open recalls are still a major public safety issue,” Larry Gamache, Carfax spokesman, told The LA Times. “In fact, our research indicates that more than one in 10 used cars for sale online has an open recall.”

More than 22 million vehicles were recalled by the National Highway Traffic Safety Administration (NHTSA) in 2013, which was a 34 percent increase over 2012’s recall numbers and the most since 30.8 million vehicles were recalled in 2004. With the rate that 2014 is going thus far, with almost 7 million GM vehicles recalled alone by the beginning of April, it’s entirely possible that the year will end with a record number of recalls issued.

A particular focus of the LA Times article is the number of car fires that are not brought about by a collision. It is shown that insurance claims for vehicles recalled due to fire-related defects is 23 percent higher than it is for vehicles not involved in recalls. After recalls are issued, that frequency decreases to 12 percent; the Times’ Jerry Hirsch states that the number would be even lower if recalls are addressed appropriately by those who own vehicles involved.

“Consumers should take a few minutes periodically to check if there are any outstanding recalls on the vehicles they own or are thinking about buying,” said John O’Dell, senior editor, Edmunds.com. “And once a consumer has bought a used car, it’s a good idea to register it with the manufacturer via its website. That will put the car back into the recall-communication loop.”

Car owners can use resources such as recall.carfax.com or safercar.gov to find out whether or not their vehicle is a part of any outstanding recalls.